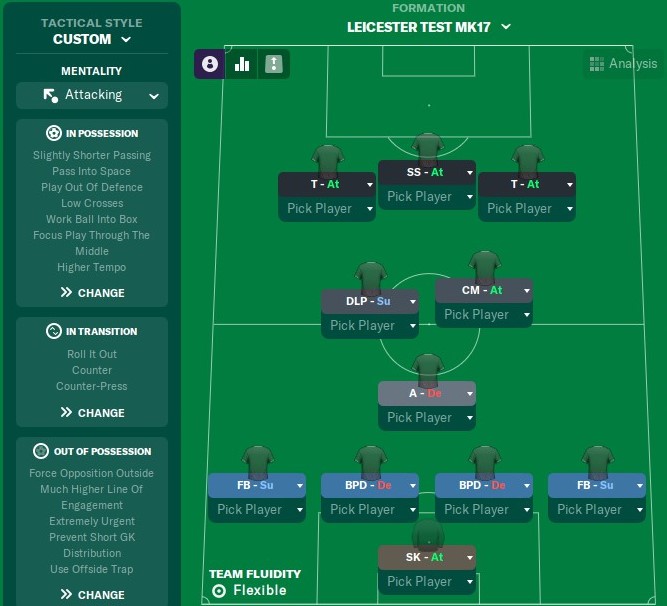 If you need the player instructions just click here.

This tactic evolved over four seasons with Sunderland which included back to back promotions to the Premier League, finishing 5th in our first season and 2nd in the next season.

The team is set up around a distinct attacking and defensive unit, with the DLP helping to link the two.

I ended up going with fullbacks rather than wingbacks because with no other width in the team I don't want them committing too far forward. Their aim when we have the ball is to take a position around the half way line and either recycle balls back towards the DLP or playing deep crosses/through balls for the front three to run on to. They will still pick up plenty of assists, in the Liverpool test Trent Alexander-Arnold hit 27 assists.

In attack your SS is the main goal threat, the more pace you've got the better but a slower, more creative player does also work because they have three other players looking for chances around them.

Your two trequartistas need to be very fit, probably the fittest in your team. They are set to mark the opposition DL & DR for two reasons. When we lose the ball it makes them track back a lot more than they normally would which helps to prevent the fullback being outnumbered. When we gain the ball back you'll often see counter attacks resulting in them getting chances as they start out on the flanks and often make diagonal runs in behind the DCs.

If you do not have a goalkeeper capable of playing SK(A) well then switch them to SK(D).

I performed two holiday tests with this tactic, one with Liverpool and one with Sheffield United.

An editor was used before the season started to make the team familiar with the tactic and to heal the squad to start the season fresh. I then went on holiday until the end of May with nothing else being touched. 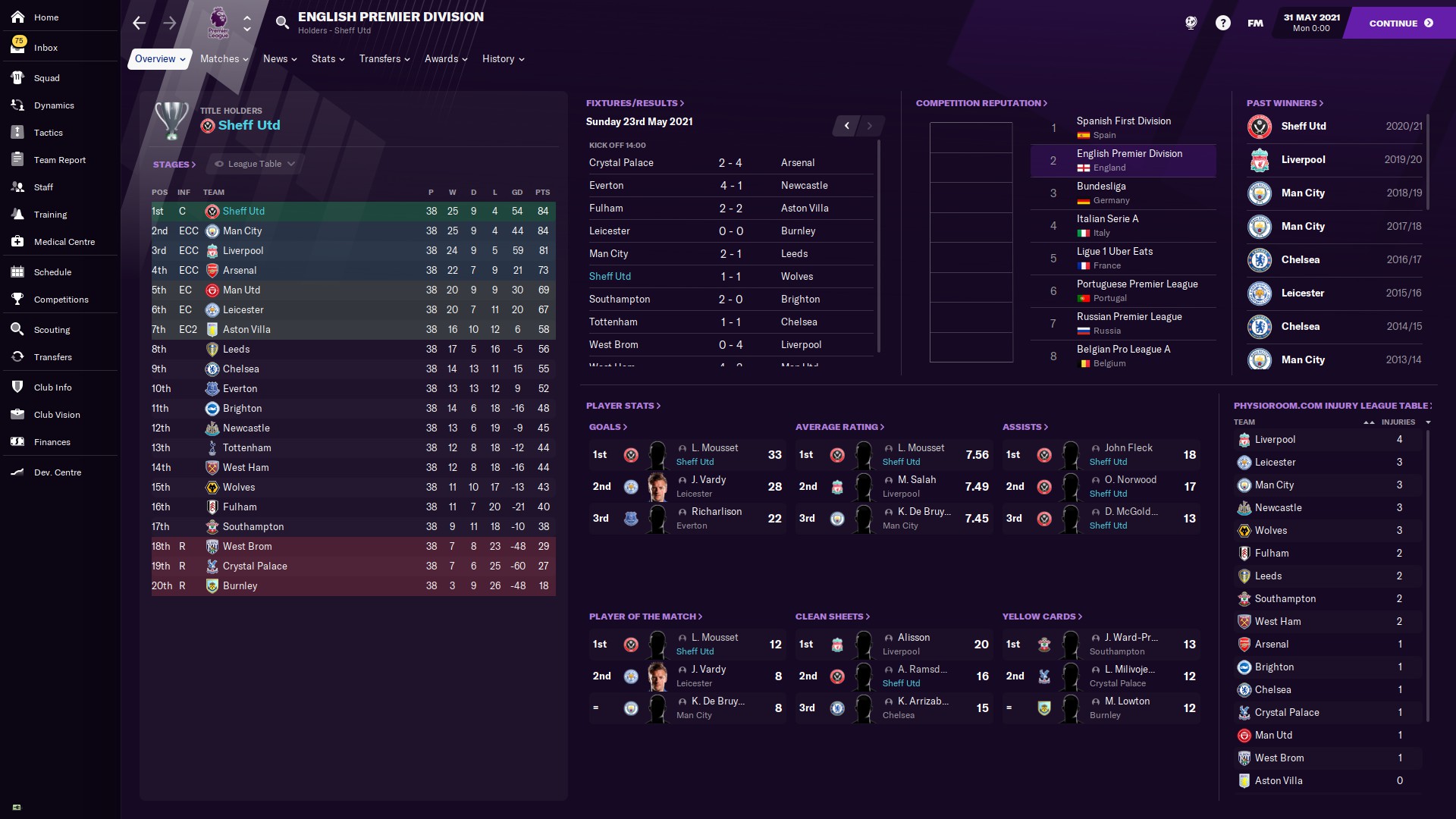 To avoid cluttering this thread so much the link above is to some more images from this test.

I wasn't expecting this given the media prediction of 17th, but it was a nice surprise. Reached the semi-finals in the Carabao Cup and FA Cup, being knocked out by Arsenal and Man City respectively. 2nd in the league for XG and the fourth best XG Against. 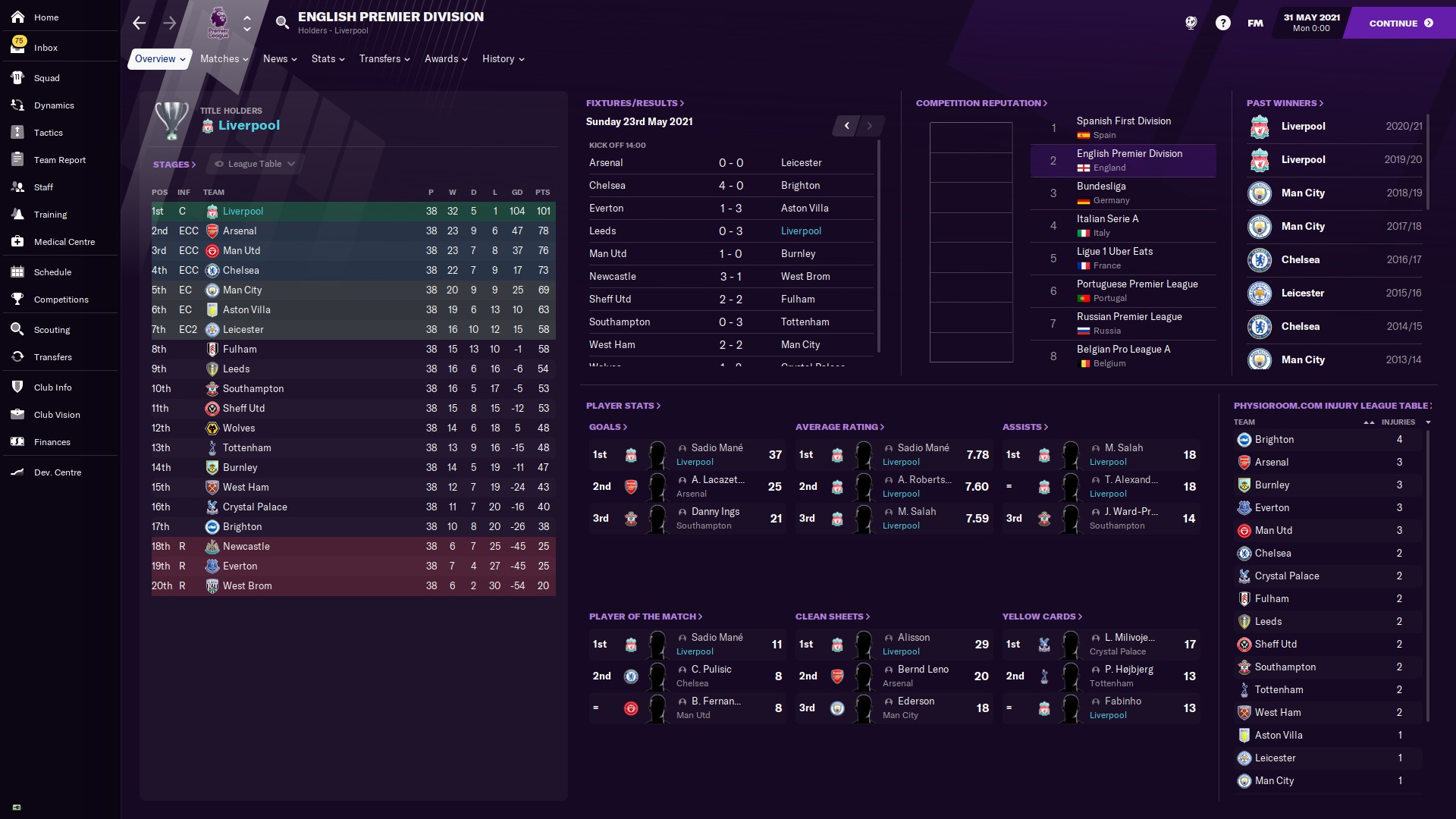 To avoid cluttering this thread so much the link above is to some more images from this test.

116 goals for, 12 goals against and a quadruple isn't too bad! Annoyingly the Carabao Cup knockout was this match where apparently we decided we didn't like to score.

For the attributes I generally just go by what the game suggests for each position.

A fast Shadow Striker is very useful but not essential.

If you can play inverted footers as the trequartistas it does seem to be a bit more effective, but it doesn't make a lot of difference.

If you do not have a goalkeeper capable of playing SK(A) well then switch them to SK(D).

I personally use the RDF Training Schedules. From that pack I use the 5 week pre-season routine, then during the season use Balanced One Match, Balanced Two Matches and Development No Matches based on how many games are in each week.

I don't use them at all.

Thanks for anybody who tries this out, I hope it works for you as well as it does for me.