How things really work or should...

Before we go into topic, i want to be really specific as many of you know i don't really care about plagiarism and craps around it.

At moment many people are confused,some of them literally started to even post tactics or posting tactics with licious-meta.
(i will call them like that because it literally cost me 26 days of literally test to understand how things works on this M.E.)

First of all i want to make you people understand a clear point, we live in a world(FM-community) where if you are second or third place goings down you are literally no considereted,that's sad but can that's the truth.
I want to face with you guys first this : 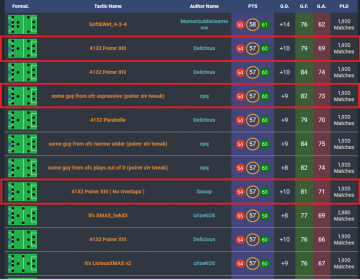 I just took few examples,but if literally they changed one "cosmetic or not cosmetic", option why are they the author of the tactic? How is even "fair"? I mean i don't know if it ever happened that a tactic(style and "player-istructions) slammed-in but how a Tactician or an assembler is protected from that?
You can ask to Arena-Server-Machine or i can show you guys that i've reached almost 1k hours on FM23 and yes i am only testing since release.
I mean something like https://fm-arena.com/tactic/3909-soft-wet-4-2-4/ it's ok all good, because he did mentioned me because he used my "meta-rules and tactical istructions".
(And i am sincerly happy that he got 1st place)
Now as you guys can see many people using them without even understanding what i went trough in order to achieve that.
So since we can't really ask to @Zippo to go shoot-gun people that are so nicely that don't even care that they are just copy-pasta w/o any understanding or respecting that, would be nice if at least i can compete again in the queque because even if i start to mass-release, i've f**ked up my queque because in order to achieve "licious-rules"; i've literally translated those pile of data that were given from The Bible.

I know i might sound Hyprocrital,but i can't find any fair solution about that, i won't go through something like happened here Corsair IF, some people wanna try to f**k with the wrong guy,because once Chocorelo understood he was on the wrong he went it defensively,because i've literally put some traps in order to call out some "suspicious" people,like the reliable Set pieces are basically from Zaz, i am supposing it because from the Pixar's file there are many set that are literally called "Zaz",so even used them to see if at least people checking things before even downloading a tactic.
And it's hard to say that i even copied someone because i've literally did everything through this site/platform and went on a "opensource" reasoning.
If you guys need more infos because you don't understand what i did, feel free to ask or you can go collect the puzzle pieces by your self.
But if it was that easy everyone would've done that and just waiting for someone to translate it, it's the most sadest thing that someone can do,at the moment are too many that it's already out of control.
So since at least i might be full of my self, i deserve just to compete with the weapons that i've created :P!

It's an opened discussion, if you think i am wrong just explain me, i am literally new on the community and i like to even hear/read others point of views.

Just from what you are testing and how you're testing now i can tell if you are just a meta-pasta or you doing something with reasoning.
Too easy to see everything or everyone with those tactical istrucions on it now.

"THEY ARE META MAN WTF".

Because if others can do that i can do just a little better,because i know what i am doing at least.
The only ones that can literally do w/e they want without even asking me are @crizeKOS and @opq becasue they in different way helped me with the translation.
Even others can do that don't get me wrong, but don't wonder if i do appear and make some jokes around like i did with Corsair IF.

First of all, I'm quite frustrated that in this busy time I have to spend my precious free time on investigating this case.

@Chocorelo19, I've looked at your 'Prometheus 2.4 Correct V' tactic and found that the only difference with Soft@Wet tactic is 3 player instructions for the right striker and 1 player instruction for the left inside forward and that's all.

Instead of telling it as it is and helping us, the guys who pick tactics for the testing, to evaluate the changes you made without difficulties and decide whether it's worth testing or not, you decided to make it as confusing as possible and not to mention that your tactic is based on the highest rated tactic, which might be based on other tactics but that's a different story. I guess, childish intentions to take as much of the credit as possible stand behind such actions BUT I want to make it clear for everyone that such behavior is the best way to end your presence on this site.

@Chocorelo19, I really hope that you'll learn from your mistakes and won't repeat them again.

Also, I want everyone to learn from this case.

3
This thread is closed to further replies