Egraam
Profile
Find Threads
Find Posts
1 2 3 4 5 NEXT
Threedom by Egraam
Posted 3 days ago
Machismo said: I play with non-elite teams e.g. mid to lower EPL.  I want either one multi-task tactic or a combo of two or three interchangeable tactics during the match.
1) All must include 3 at the back, + 1 or 2 DMs. + 2 or 3 SSs.
2) Three levels to be Standard tactic + super defensive (e.g. vs elite) + all out late goal attack.
3) ALL three tactics based on 3-at-the-back.
4) And mid or lower EPL teams.

You could go for Threedom V3 as the base tactic as it's the best rated 3 at the back tactic on this patch, ZaZ - Copper as the defensive one because it has the best defence on this patch (maybe you could even start with balanced/cautious vs elite teams away, not 100% sure though as I haven't played with that tactic much), and for the 3rd, more attacking slot, use Threedom V2 because it scores a bit more than V3 and maybe even switch to attacking/very attacking, but that could be risky if you are a low table EPL team. Another option, to invest even more in the offense, would be to go for higher/much higher defensive line, depending on how much do you need the goal and are willing to risk.
Threedom by Egraam
Posted 8 days ago
babemocni1988 said: Thia seems like real revolution,have you tested it more? Expand

Yes, tried and tested, from my own experience the improvement is even a bit bigger than the fmarena test is showing, because the tactic demands less intensity from the players - with V2 I often found my players, especially wingers, to be already fatigued at half time, here it's not as big of a problem, so it's easier to survive those gameweeks when you are playing every 3 days.
Threedom by Egraam
Posted 9 days ago
Threedom V3 is here, and it's quite a big tactical revolution, because I've finally managed to get rid of extreme gegenpressing - much higher LOE is still there, but pressing intesity has been lowered from much more urgent to slightly more urgent (100% to 50%) and counterpress has been removed. 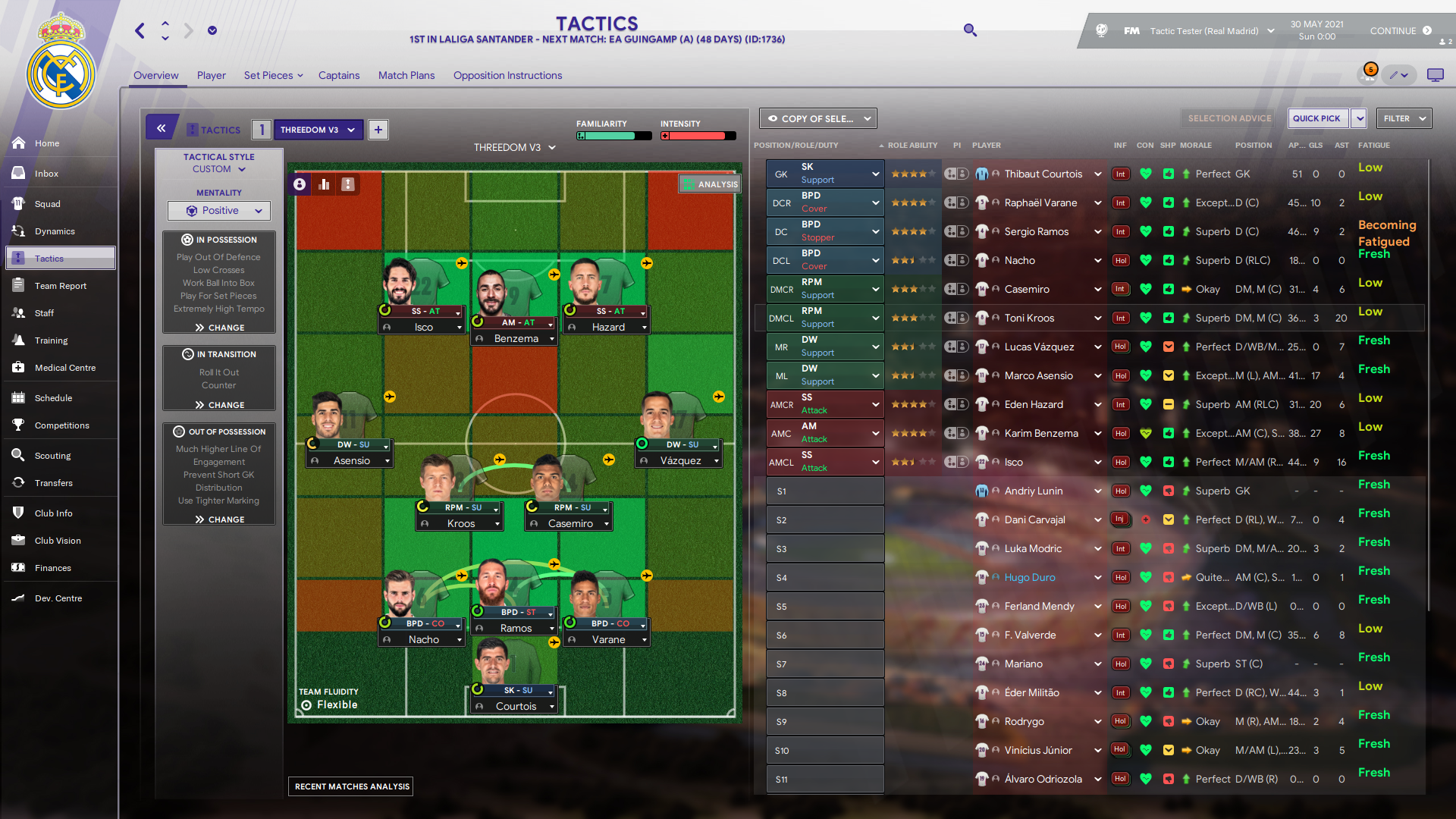 Real only 18 conceded, Elche was predicted like 19th or 18th so it's still a good overachievement, but they had 3rd goal difference in the league, so perhaps a bit unlucky point result there. 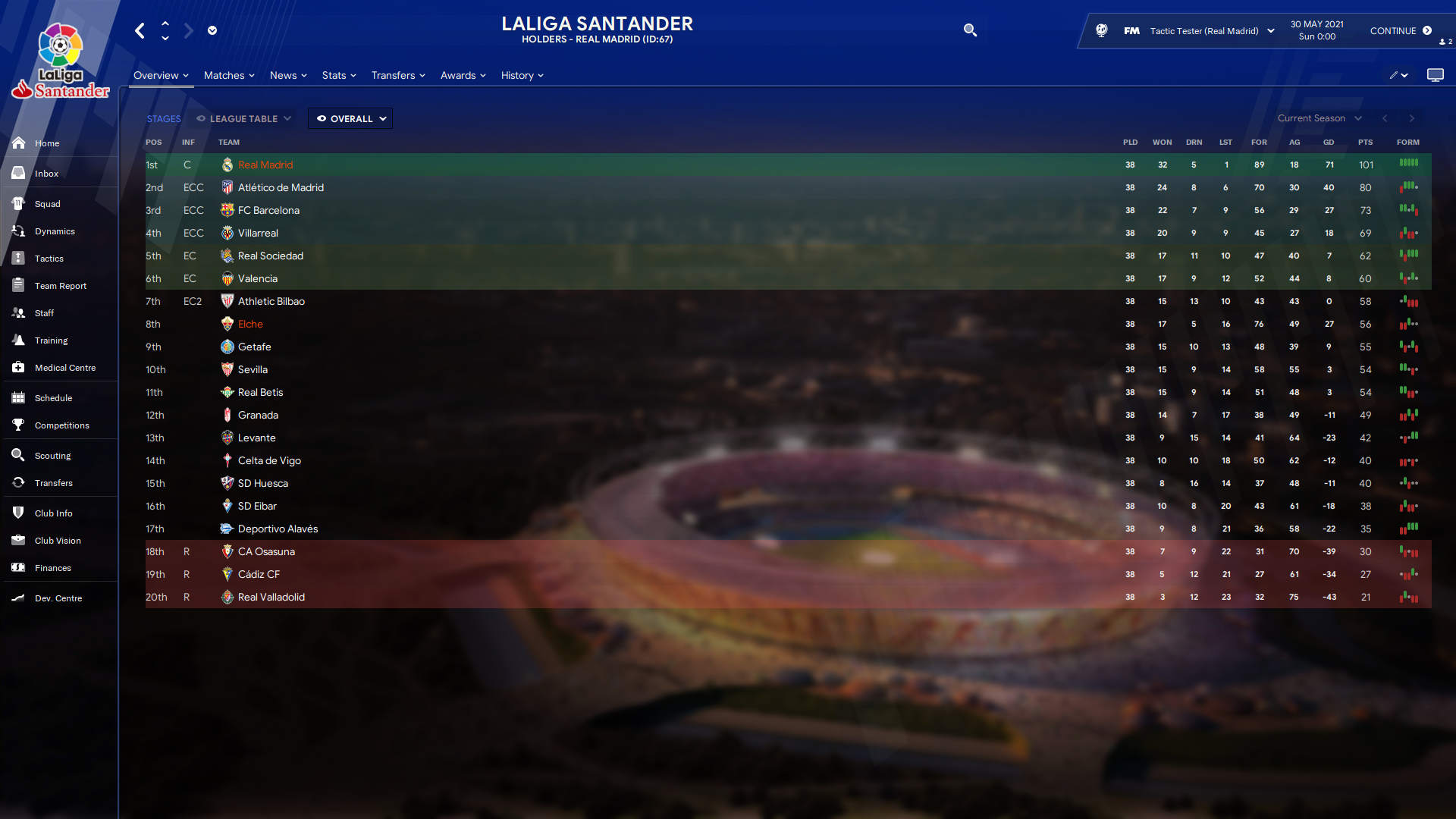 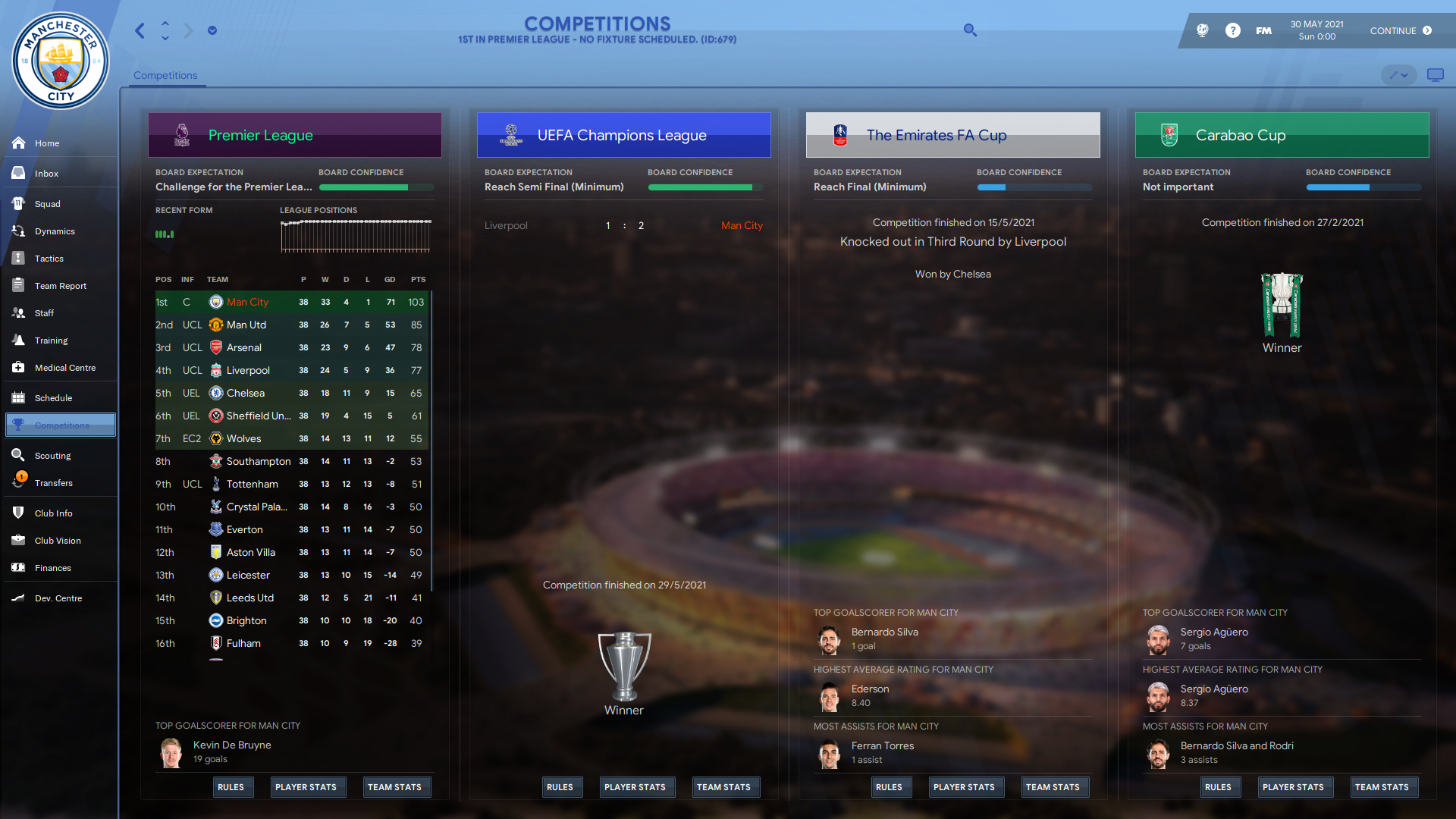 Threedom by Egraam
Posted 10 days ago
Machismo said: Just loaded 3Dom.  Was using Zaz blue with a mid-table team.  Plenty of goals especially from corners resulting from DWs failed byline crosses.  But got crushed by elite Mancity.  Switched to Zaz Copper Very defensive but not much happening up front.  Hoping 3Dom's DWs breathe some life into 3 at the back.

This thread has been quiet for six weeks.  Have you moved on from 3Dom v2? Expand

I've been more focused on improving Waves for a while, which I believe to be my best tactic at the moment, that's why there weren't any updates here. Though while testing different tweaks for Waves, I've come up with some ideas which could improve a tactic's defense - which is the main weakness of this tactic. I'll be testing them soon, and will share the updated version of Threedom, if the results are good.
Waves by Egraam
Posted 12 days ago
V2 Update: 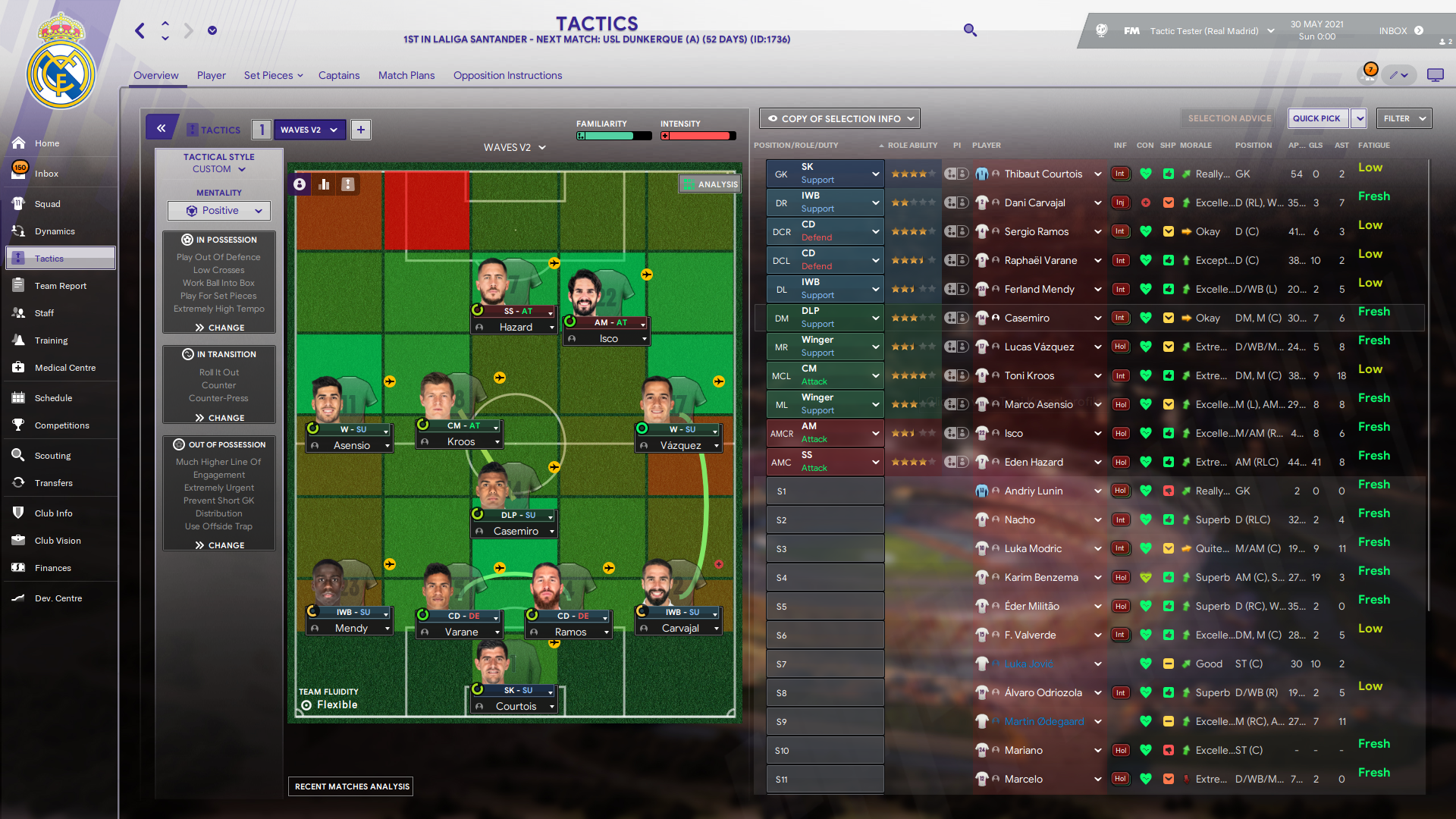 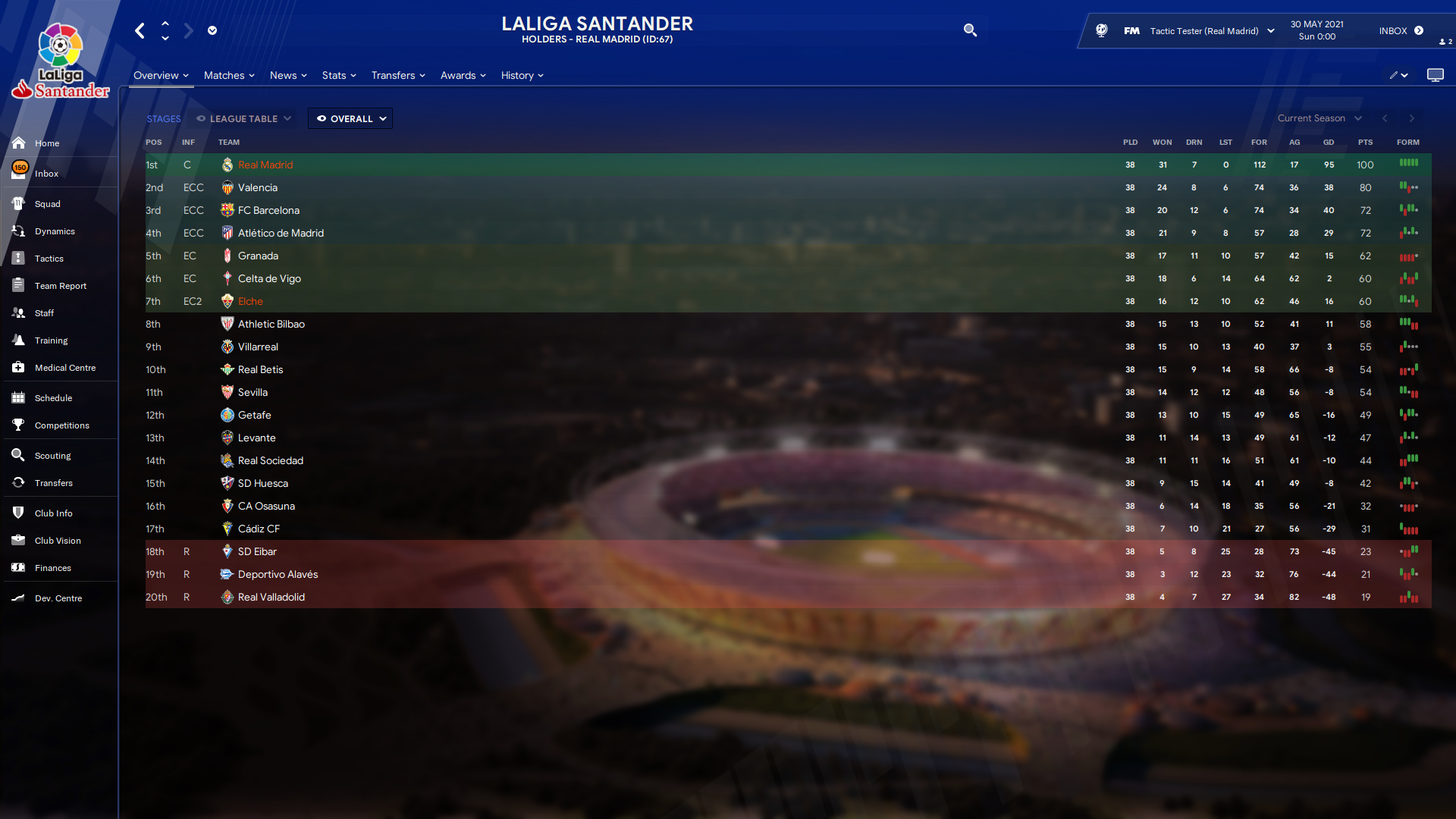 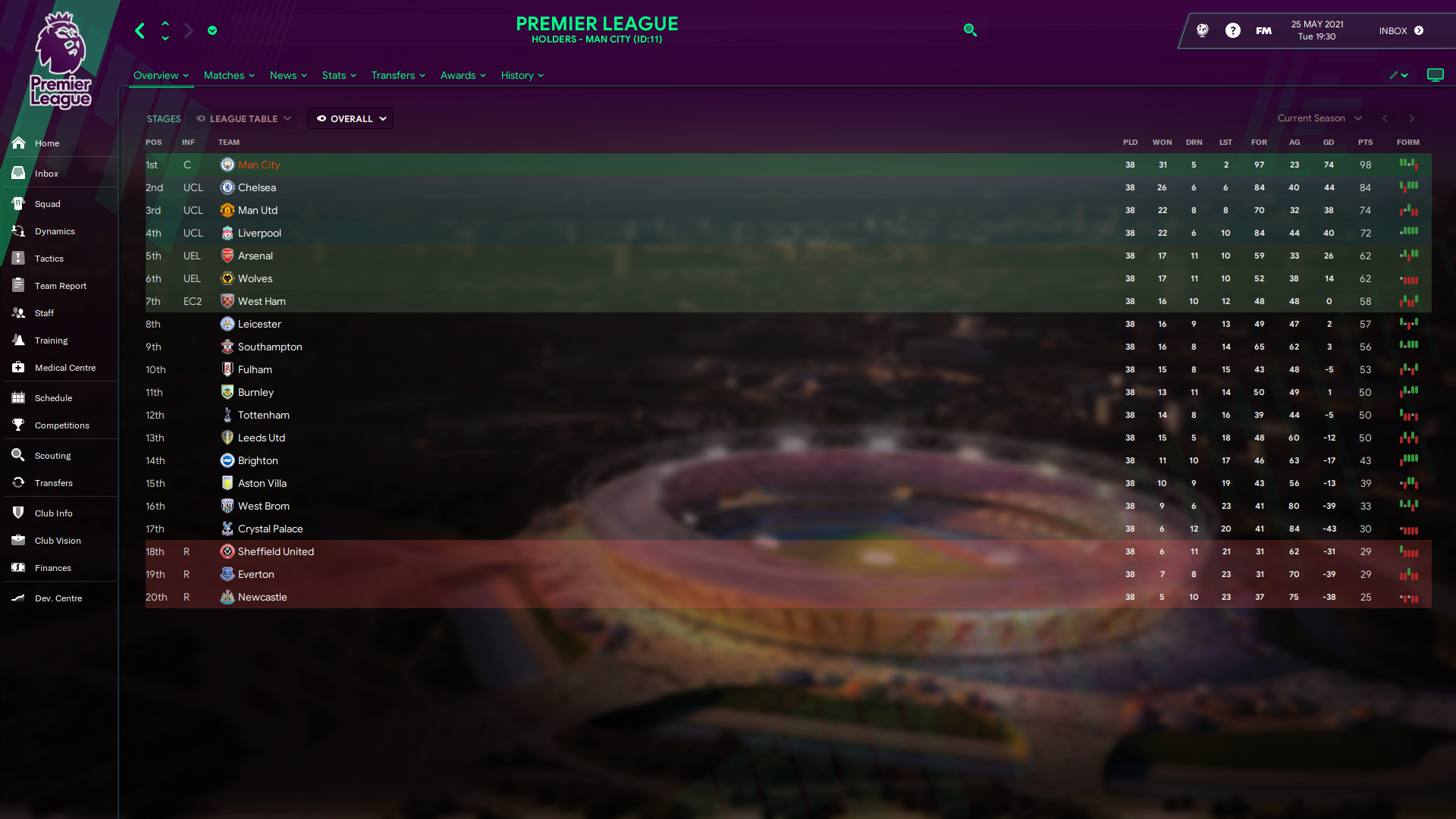 Red is clearly a better mid table tactic - even if we exclude the bad Chester performance, it got better results with every team apart from Accrington (but still there was only 4 point difference there).
Blue got better results with underdog teams - mainly because how much better it performed with West Brom and Dover - Red got better results with 3/6 of the teams, so part of it could be just randomness.
And it seems like Hungerford is just a really bad team, no matter what tactic you use with it.

Here are the save files if anyone wanted to get more data from them (they were too big to upload directly to fmarena):

Blue - https://www.mediafire.com/file/fflxk98xz5kr6j5/ZaZ_Blue_-_Results.fm/file
Red - https://www.mediafire.com/file/gzmjar1xsfesetb/ZaZ_Red_-_Results.fm/file
ZaZ - Red 3.0
Posted 18 days ago
I've run an english league test with ZaZ Red - 7 leagues, 14 teams, using worst team and mid-table team from every league, to see how it performs with underdogs across different levels of play and using different teams.
I know that a lot of people think Fulham is the worst team in Premier League, because that's what the game says when you are choosing a team, but once you get into the actual game, and go to media prediction, you can see that West Brom is by far the worst team in EPL. 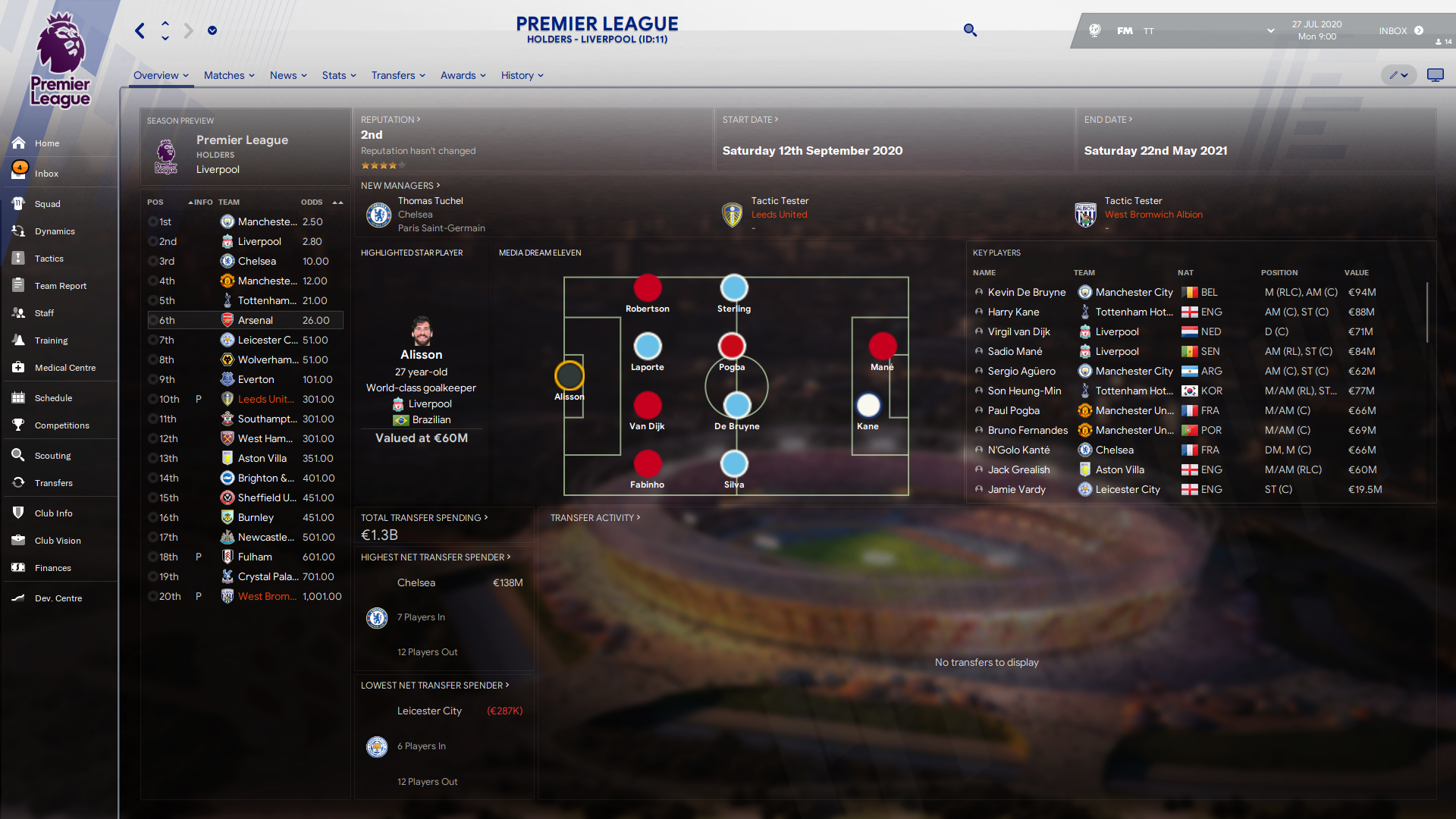 That's how the teams for the test were chosen - last and mid-table teams according to the media prediction, from Premier League to Vanarama National North/South.

Some info about the save:
- All teams have the same manager with default stats, but with experience and license automatically chosen by the game.
- There is a 5-year embargo placed on all the teams in the game, to reduce randomness a little bit.
- In-game editor has been used only to make managers unsackable
- Holiday mode, squad picked by assman, loaded the tactic, checked "use the current tactic", and holidayed until 30th May

I'll try to run the same test with Blue some time soon.

Here are the results: 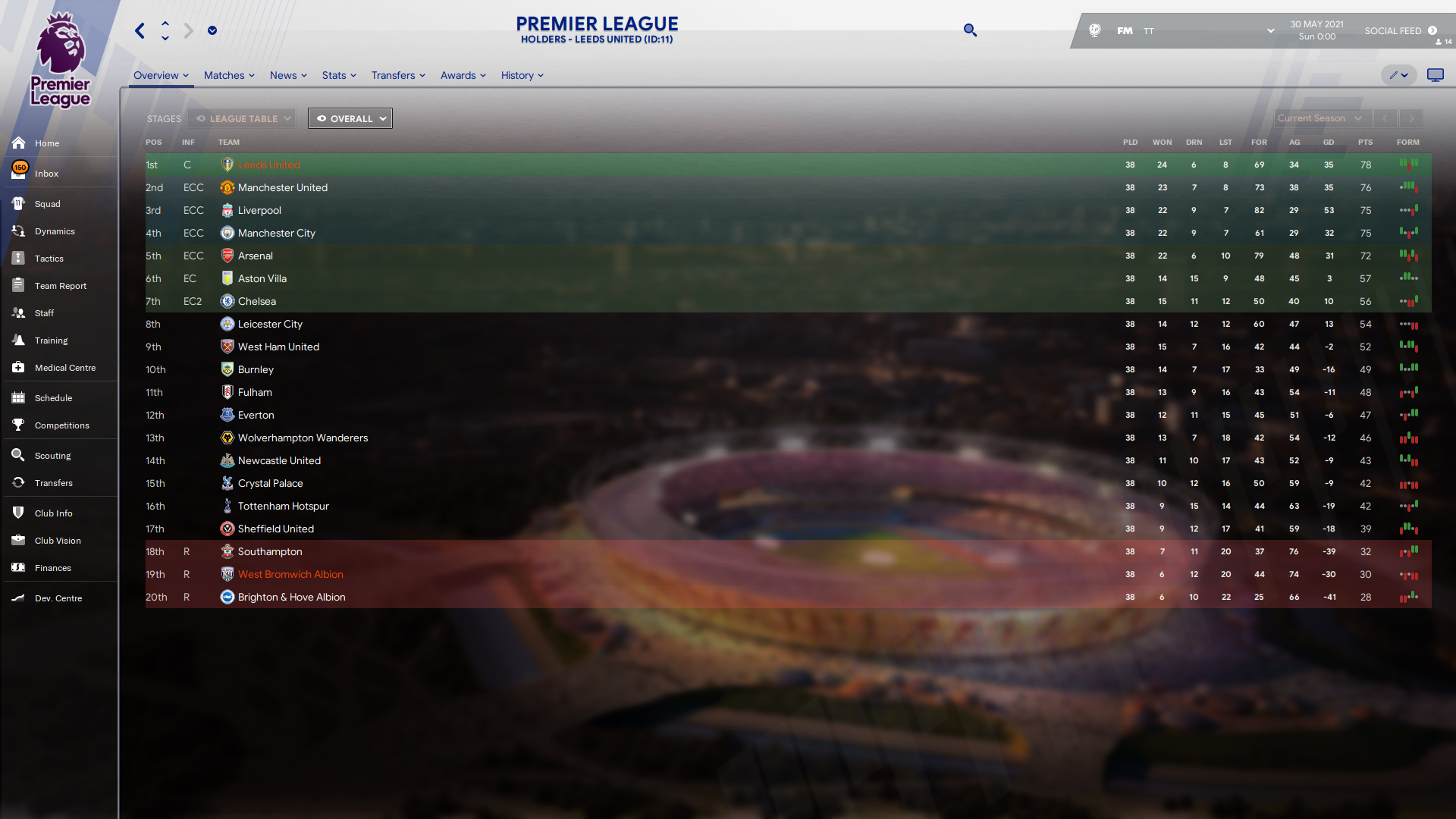 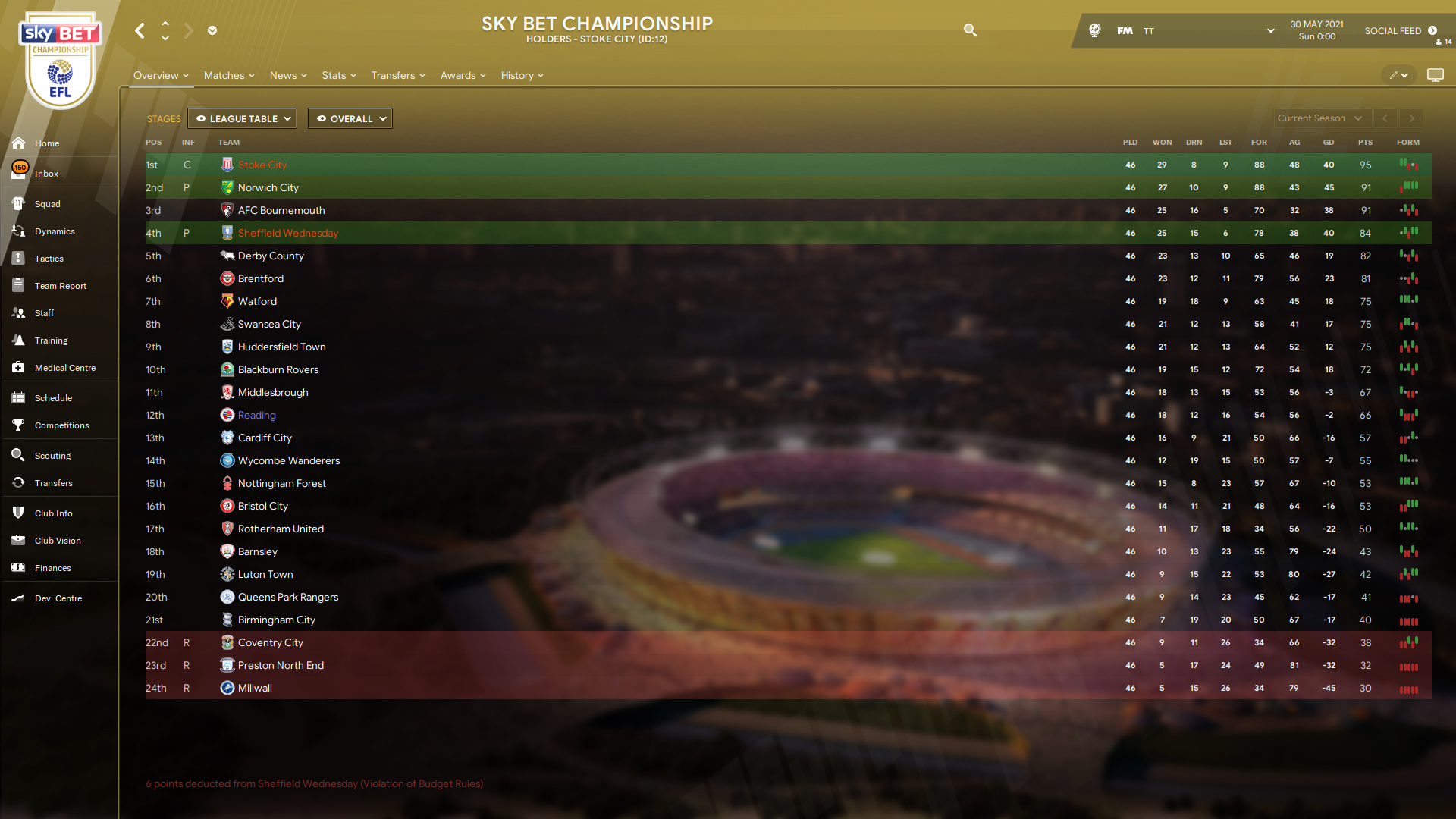 League One and League Two: 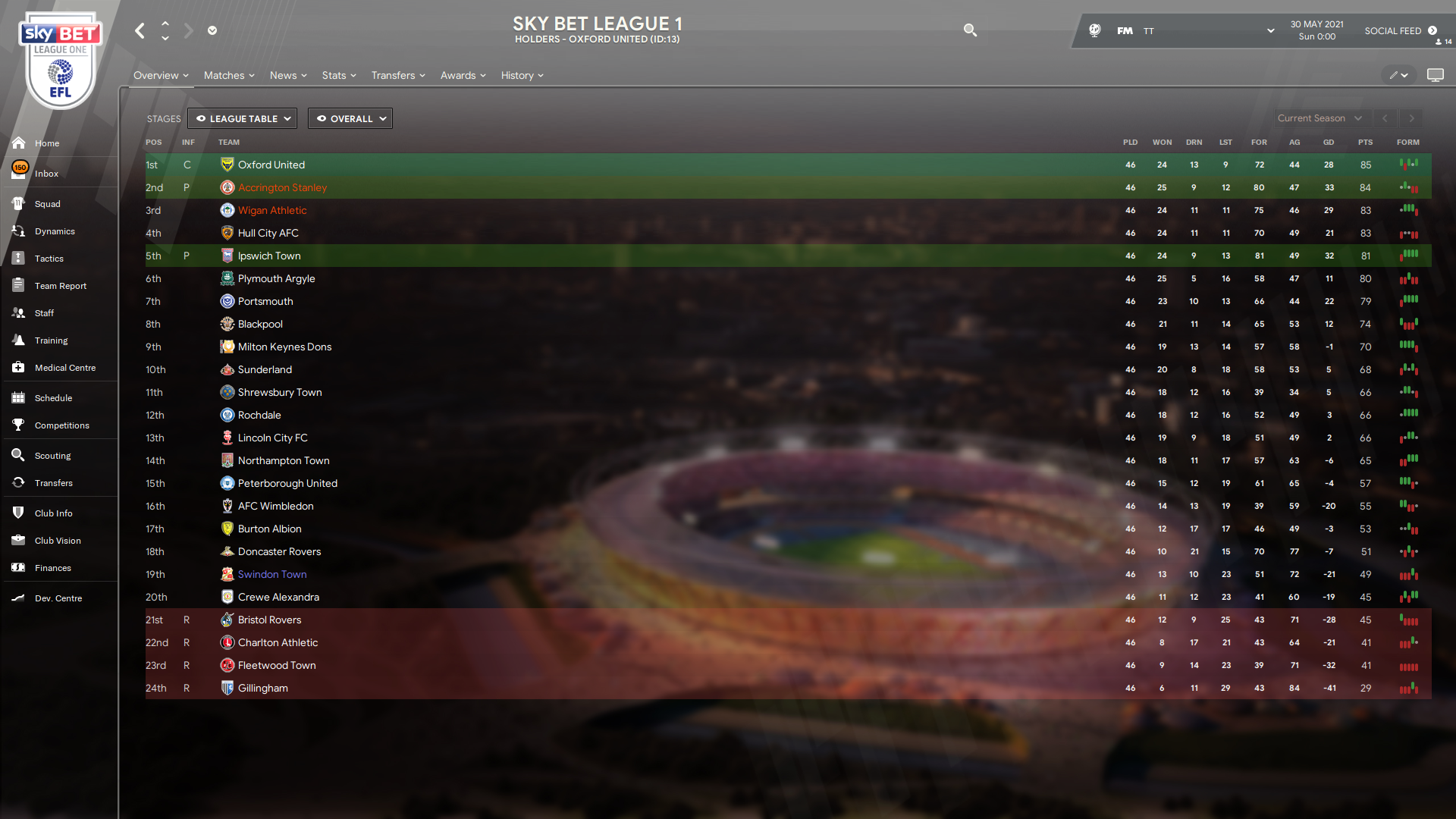 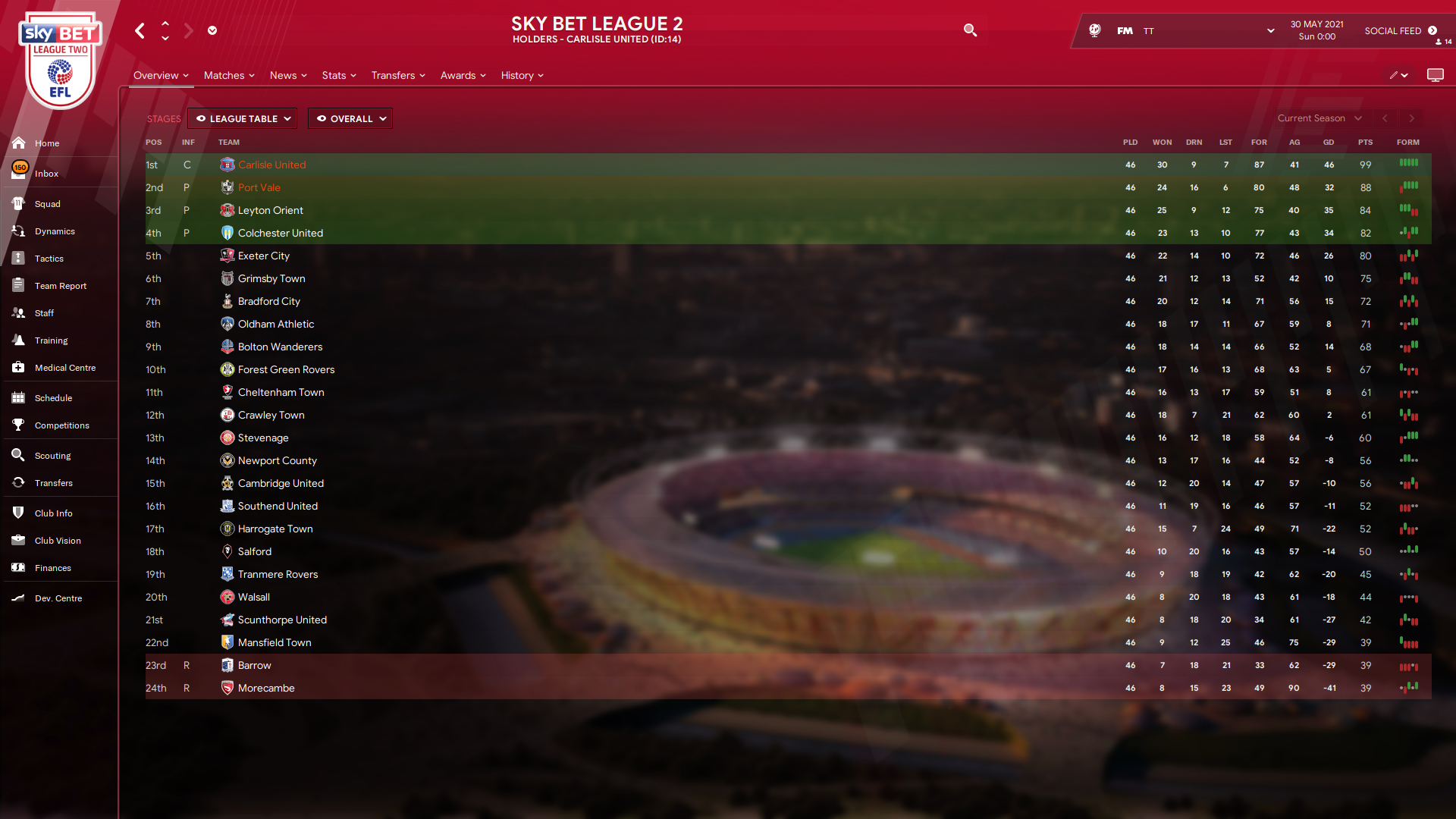 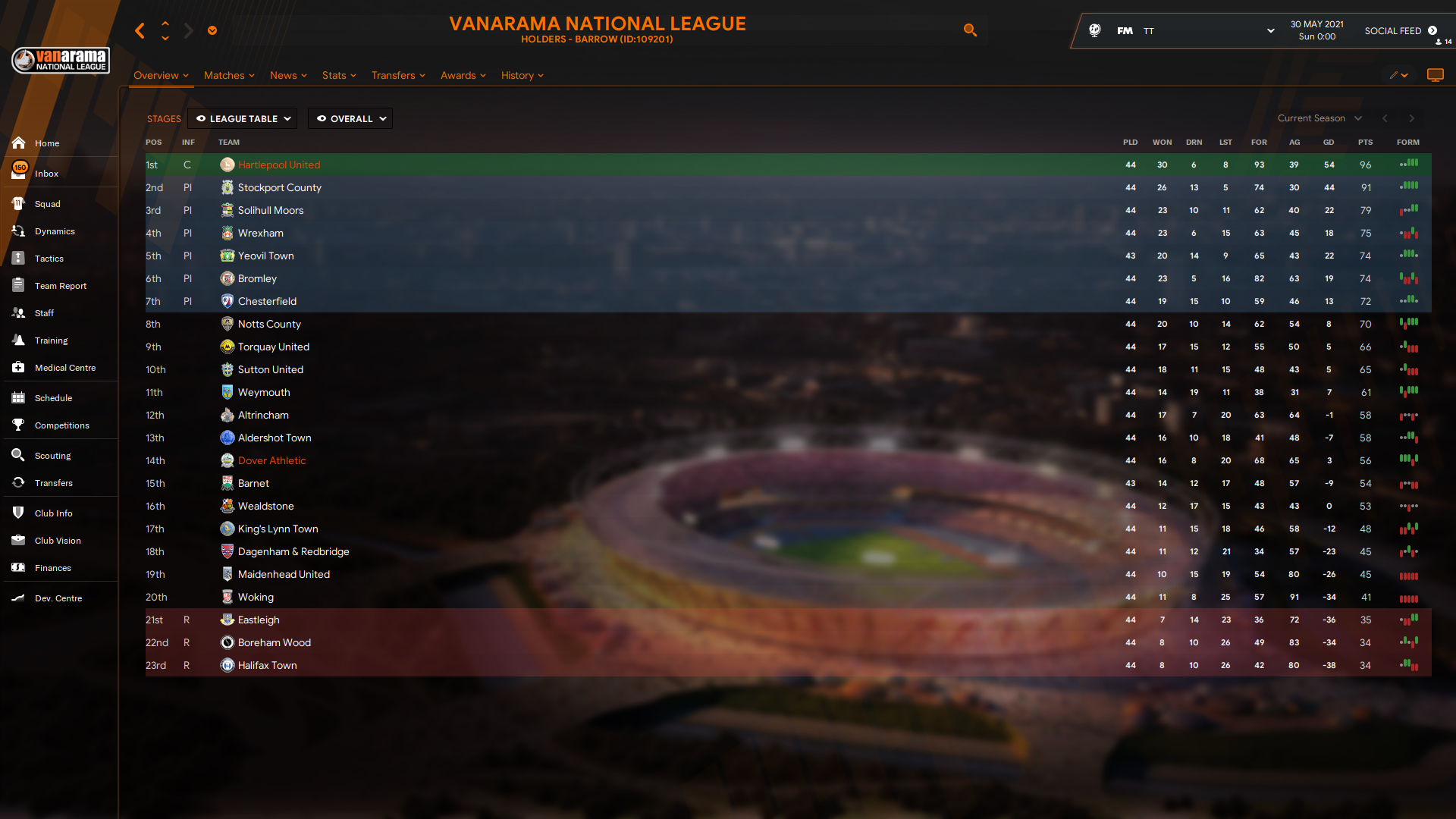 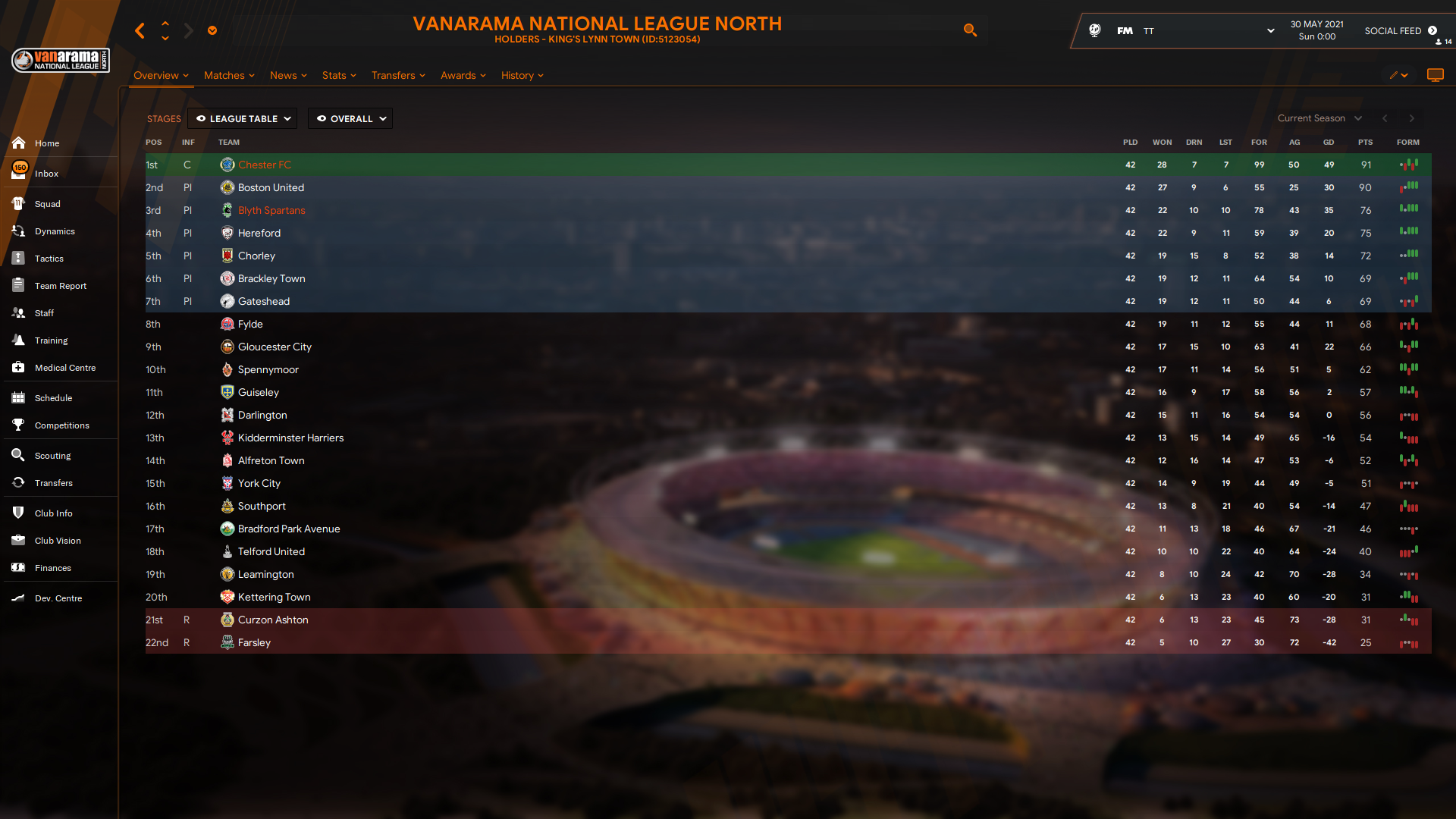 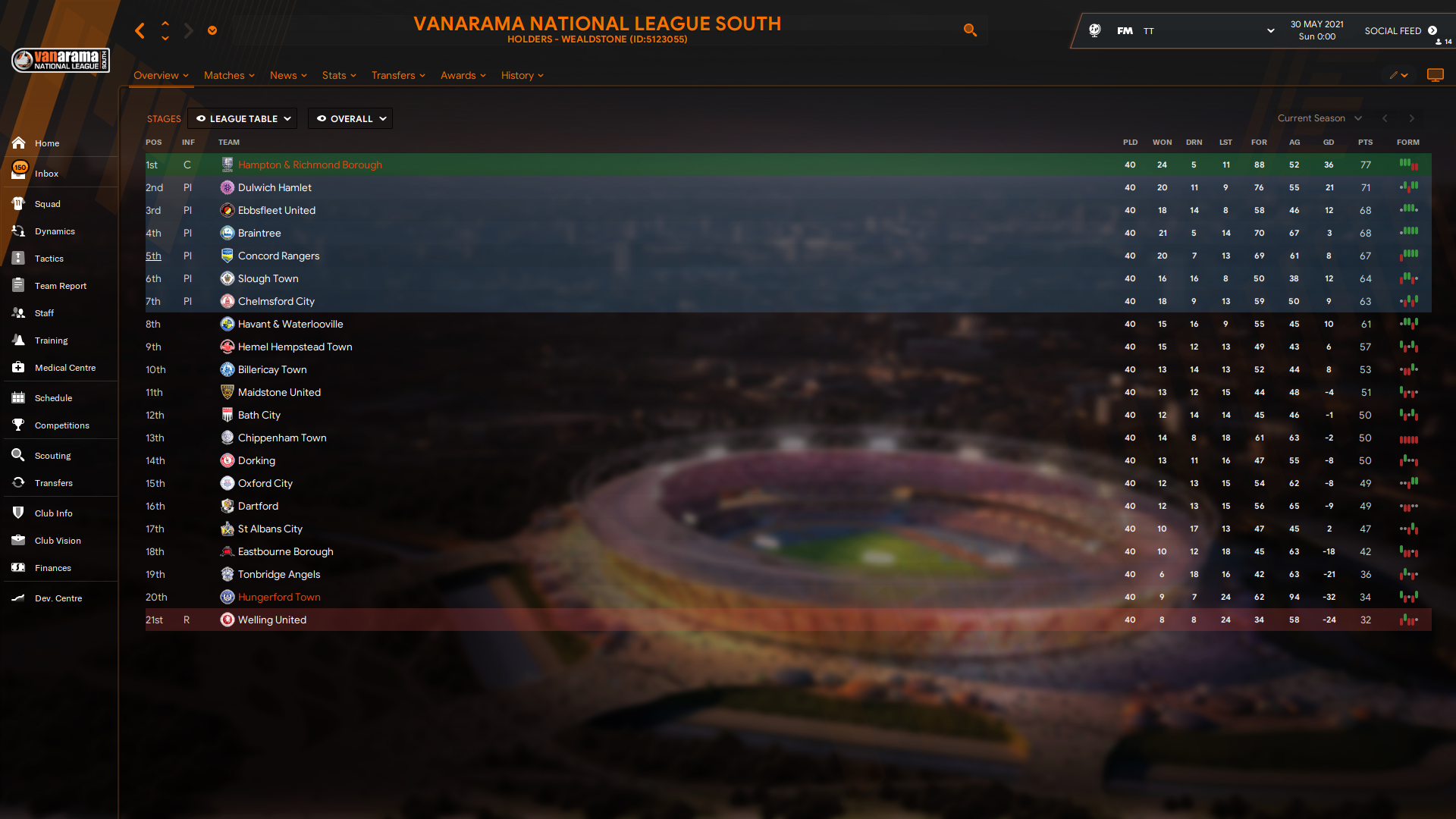 Which one is correct? Have you tested with the striker at the center? Expand

Sorry, I have uploaded a wrong file (this was an older file from a different folder and I've mixed them up), striker should be on the left, this was the one I tested, should be fixed now.
Voila by Egraam
Posted 27 days ago
Striker version:
Attacking midfielder moved to Advanced Forward. I'm not really sure if it's better than the  strikerless version (probably not), but it produces great goal numbers if you have a quality striker (Haaland 73 goals total in the season). Updated the main post with the file (Voila V3.5 AF). 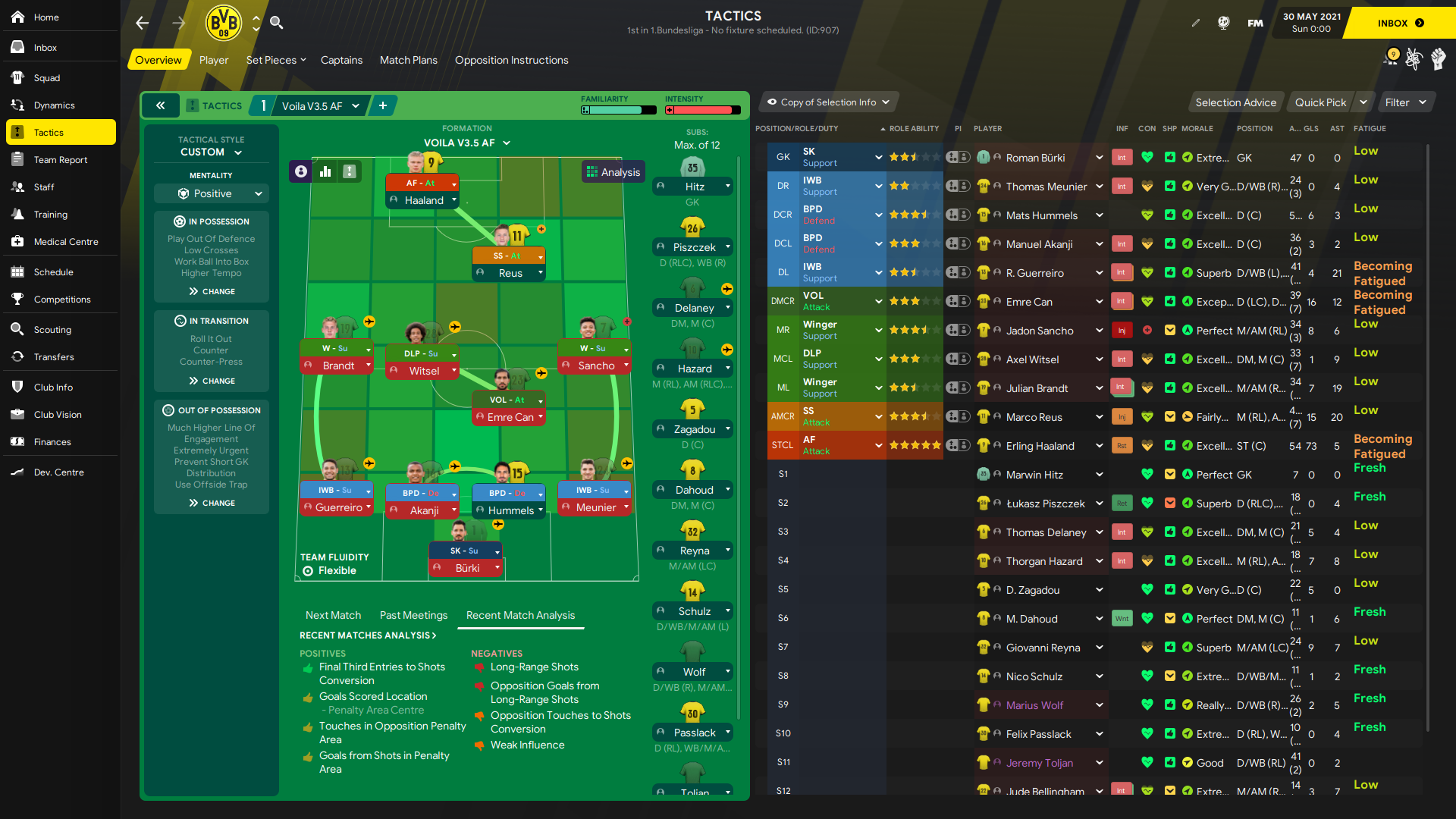 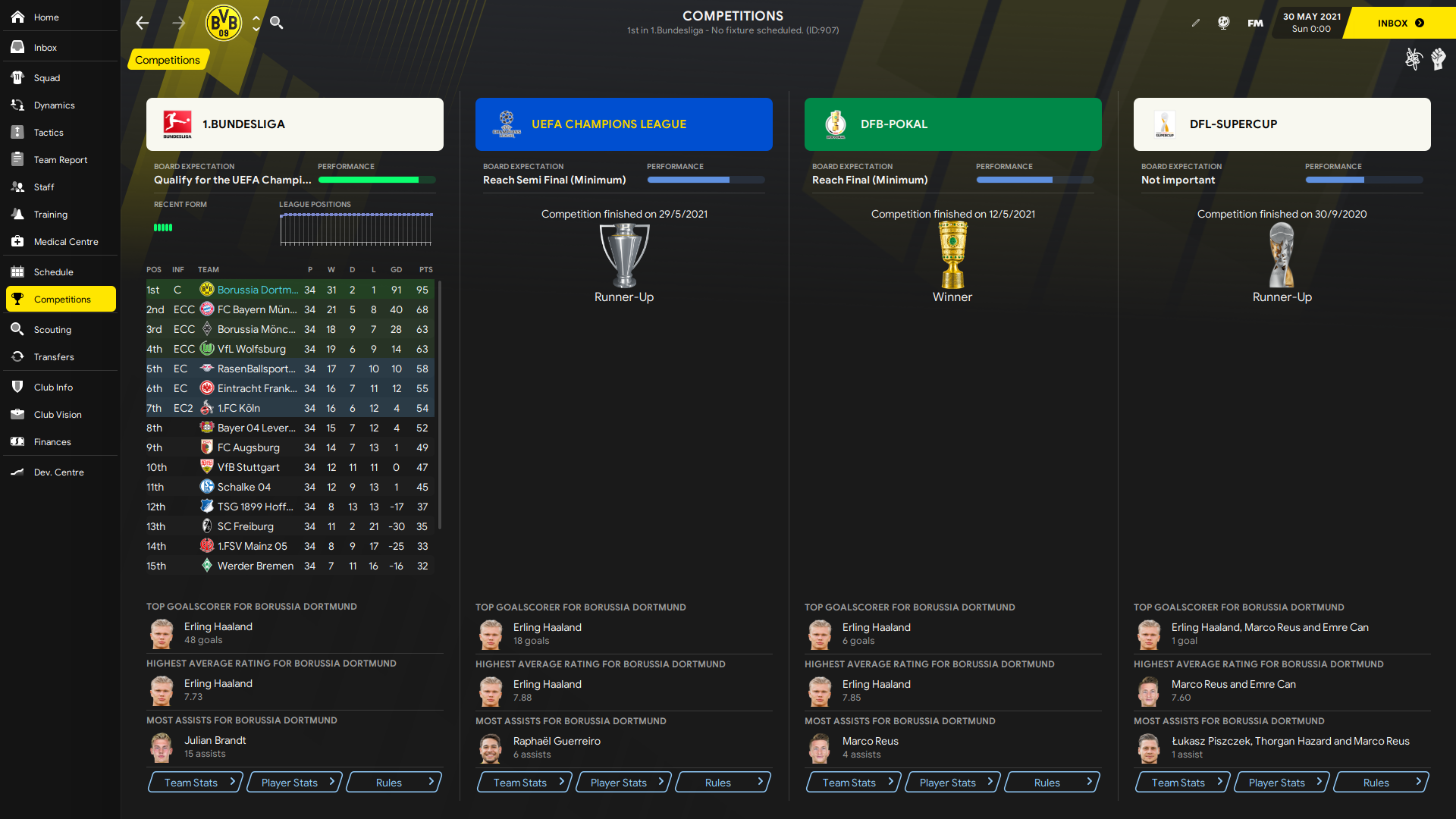 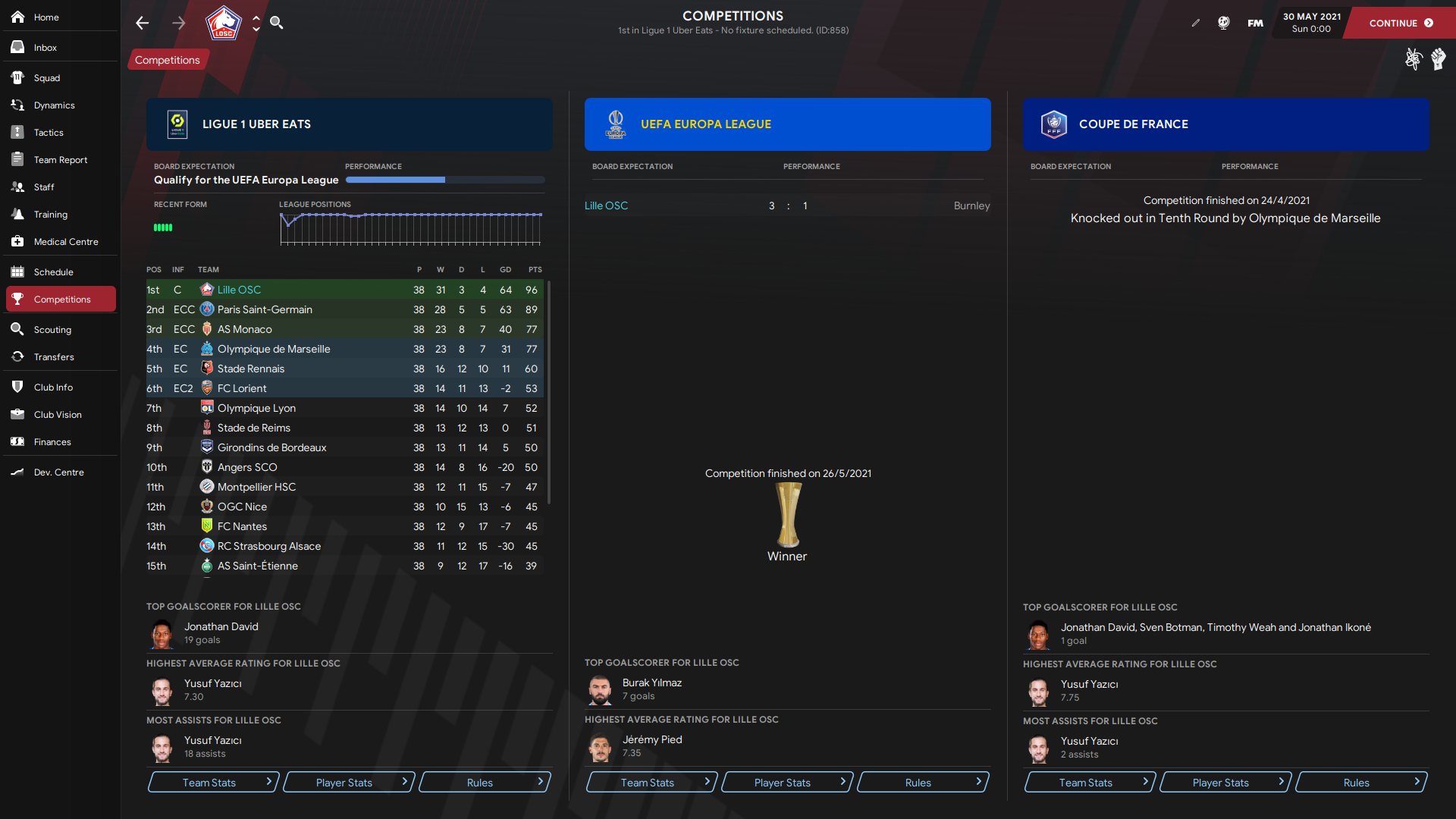 Waves by Egraam
Posted Apr 10, 2021
Throw-ins of Pheonix, rest of set pieces of ZaZ Blue. Adding a bit of asymmetry to the current top meta set-ups. 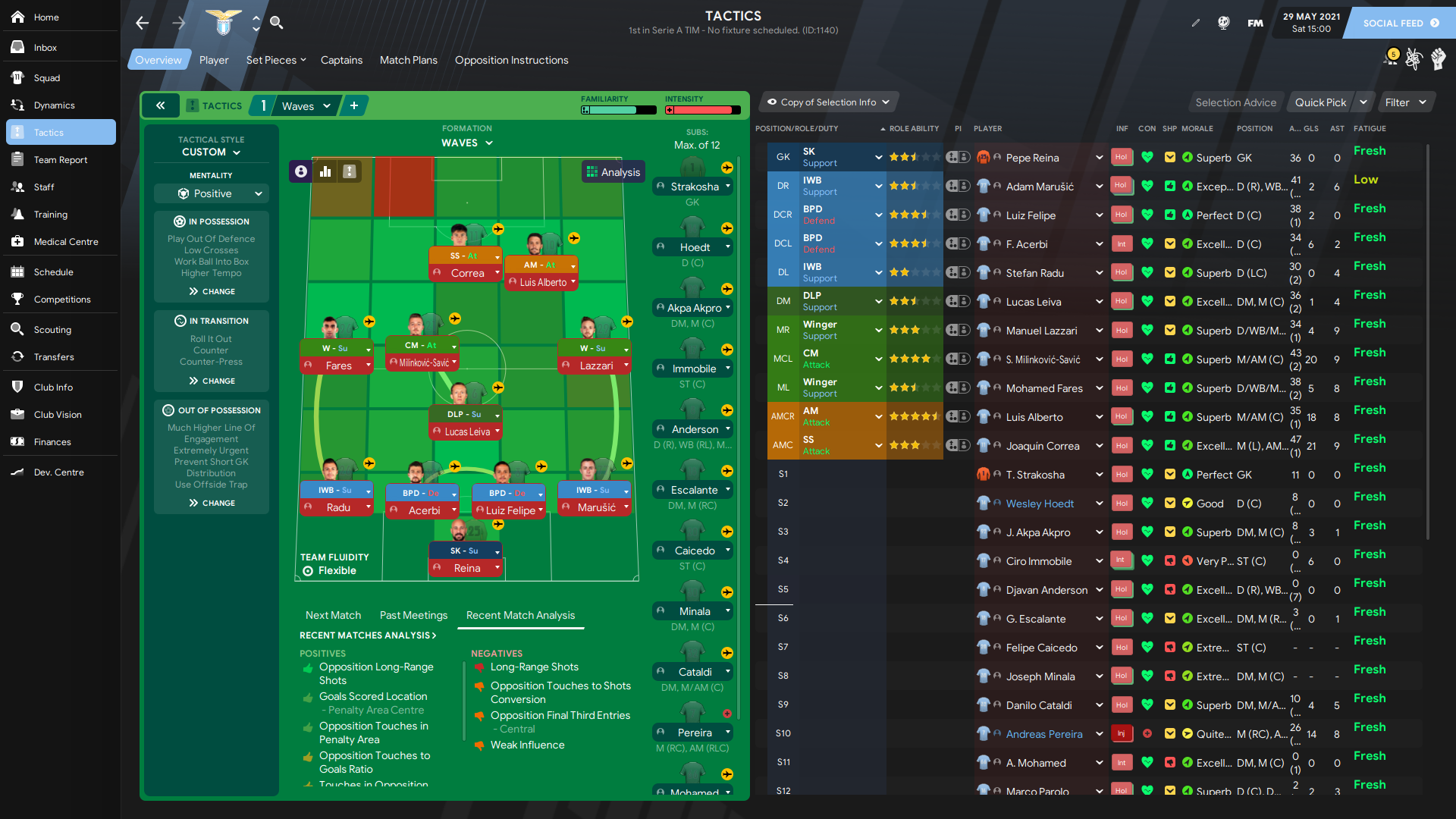 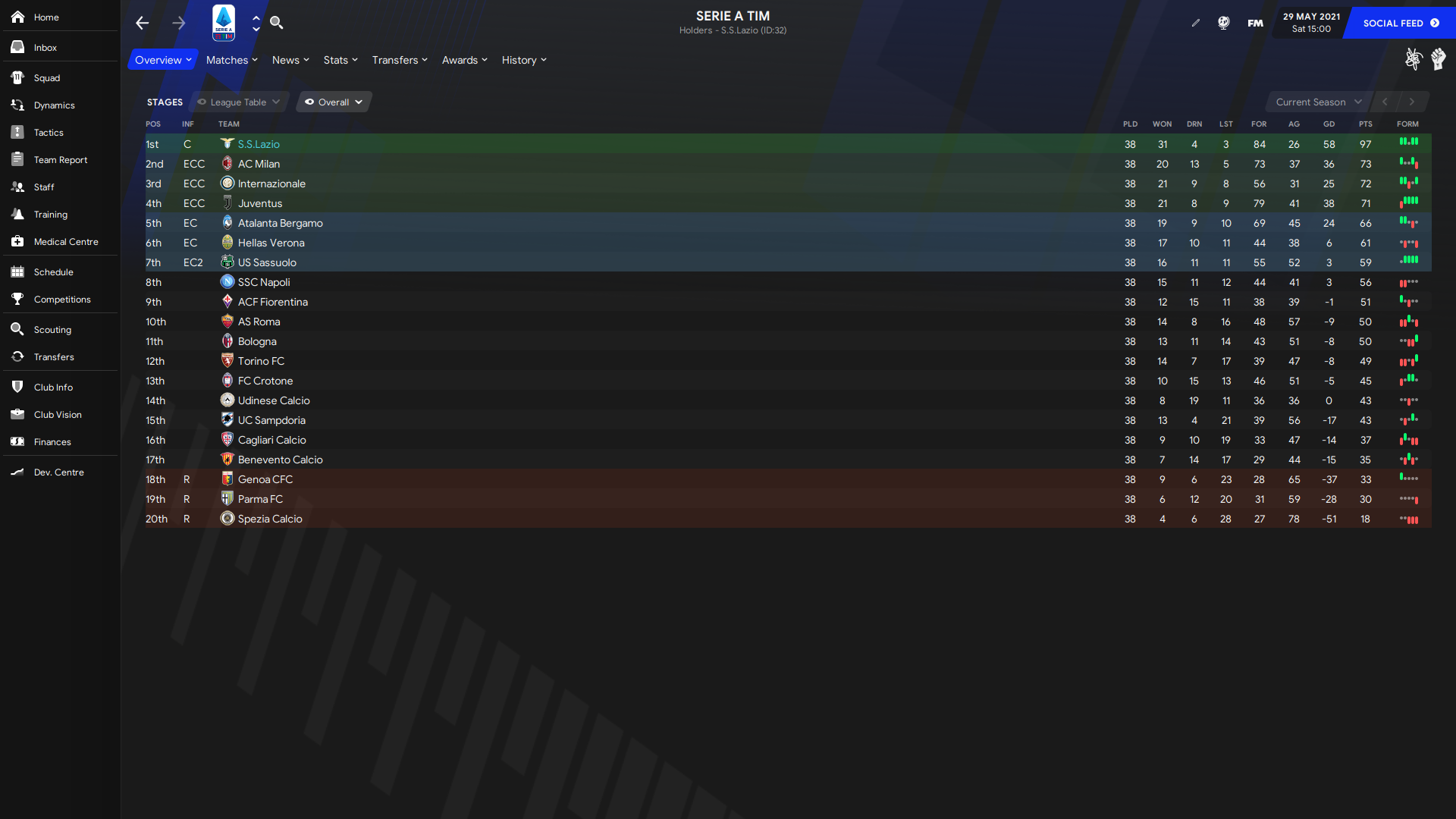 The issue should be fixed now. Expand

Should I create a new thread for this tactic and delete it from here, or keep it here?
Voila by Egraam
Posted Apr 10, 2021
I don't know why but I'm not able to start a new thread, the website just refreshes when I try to make one (I've tried different browsers but nothing works).
Voila by Egraam
Posted Apr 8, 2021
Small tweaks, updated the main post.

- Removed Pass it shorter from central defenders
- Added Get Further Forward to wingers and fullbacks
Narrow Phoenix V5 Tweak - consistency consistency, finally consistency!
Posted Apr 7, 2021
famulor said: It seems like a good tactic but holy hell is it hard on all the players during a match. Expand

Magician uploaded a condition-saving version of Pheonix as well. If you're up by 2+ goals and don't have to worry about result anymore, just switch to it.
Threedom by Egraam
Posted Mar 29, 2021
salzby said: 3 defenders and 3 strikers. I'm wondering from whom you have taken inspiration for this

I've been trying to make a more faithful recreation as well, with high possesion rate, but shorter passing and lower tempo just don't really work in this year's FM.
Threedom by Egraam
Posted Mar 29, 2021
Improving defense will be my main focus now for sure. Not having fullbacks/wingbacks and using just defensive wingers on flanks is the thing hurting the defensive performance the most, but I've tried moving them down to FB/WB and got worse results. Still pretty happy with the results of V2, as there weren't many viable tactics with 3 defenders at the back before, and this one is pretty good.
Threedom by Egraam
Posted Mar 29, 2021
V2 Update, which is a massive improvement in terms of consistency and overall performance:

This version is much more consistent (the previous version could get 102 points  with City in one test and then 88 in another, this one is a lot more stable), much better defensively while still really good offensively.

I've updated the main post with the file. Would appreciate a test because like I said, it is a really big improvement. 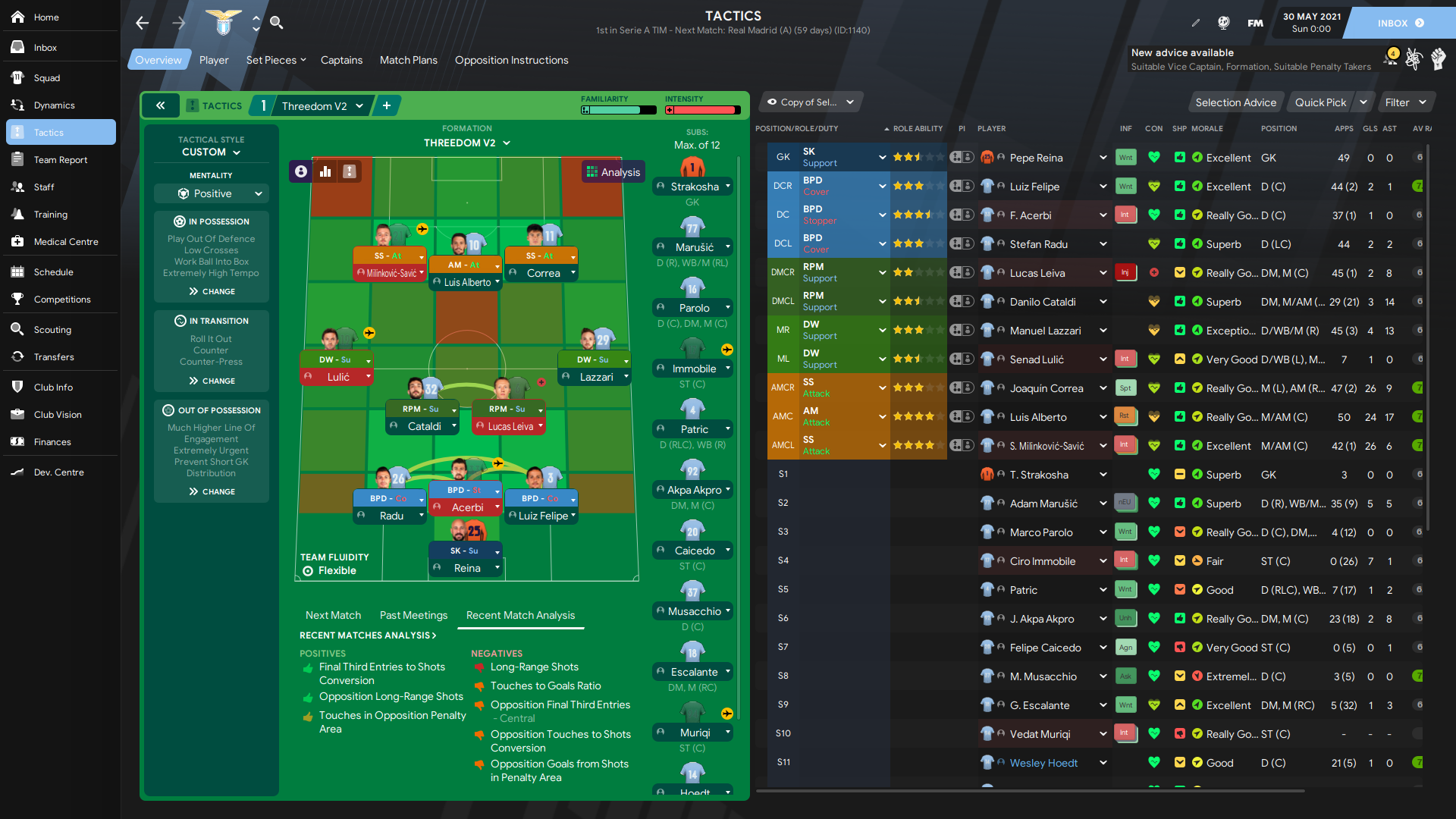 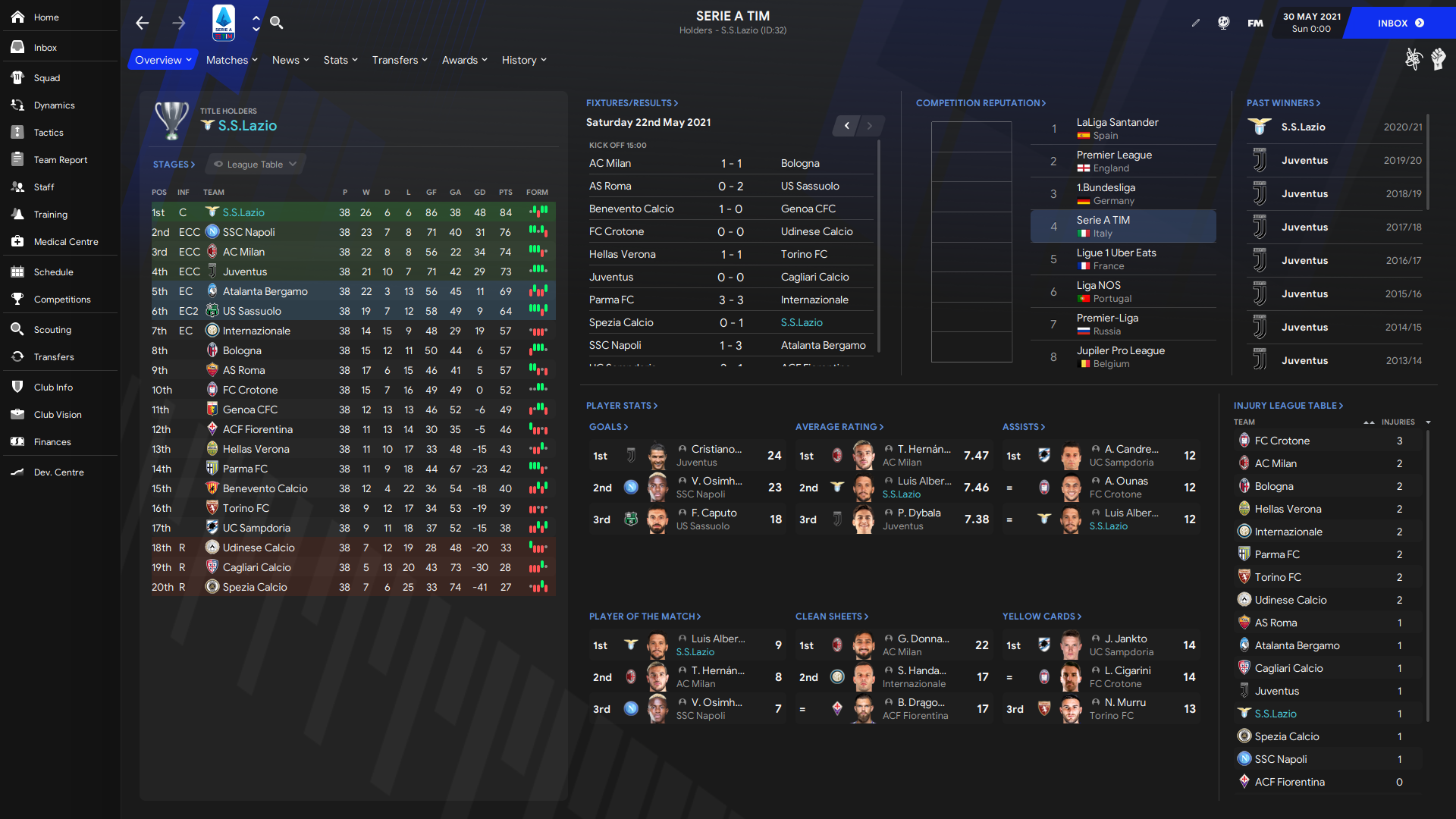 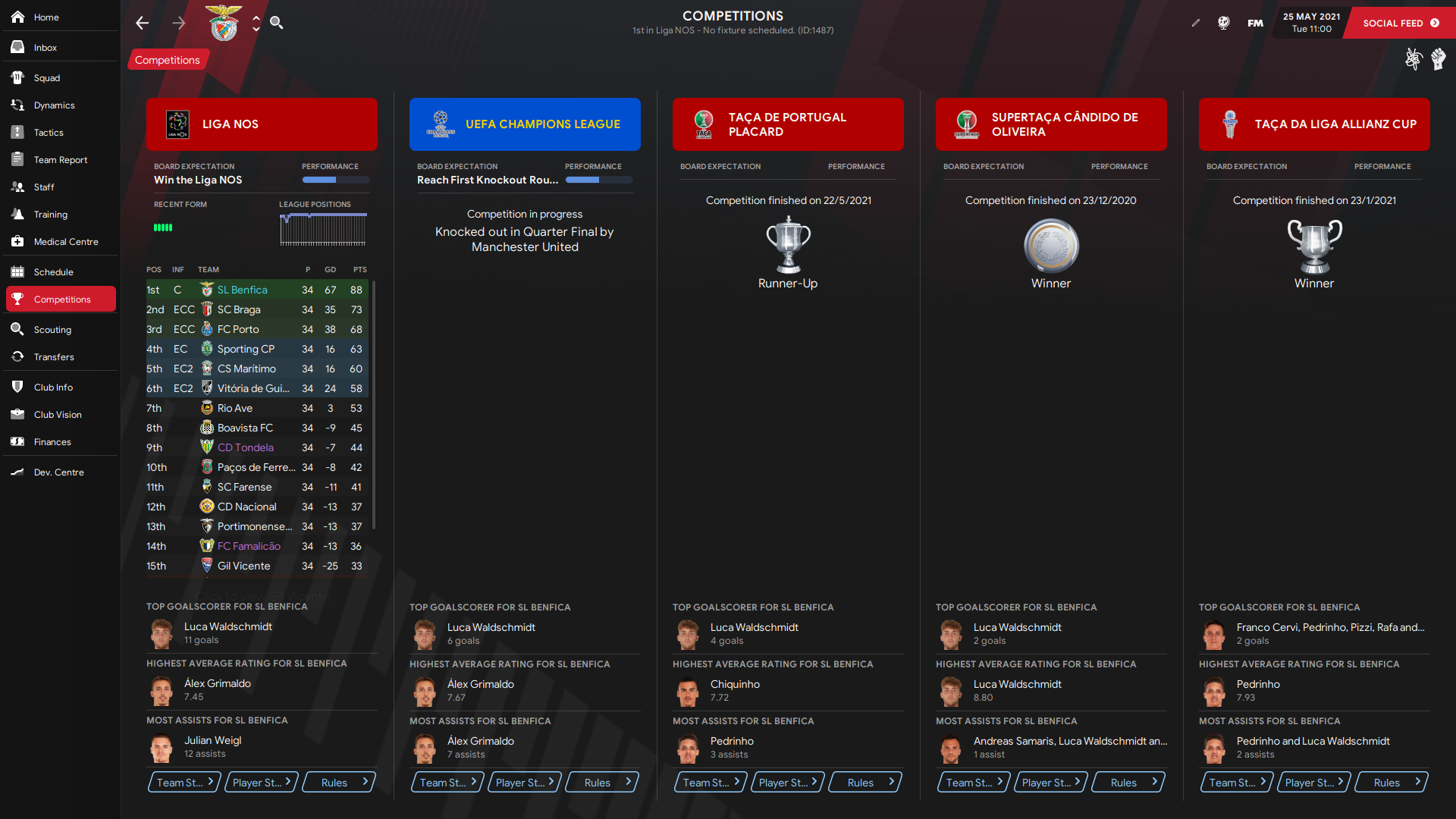 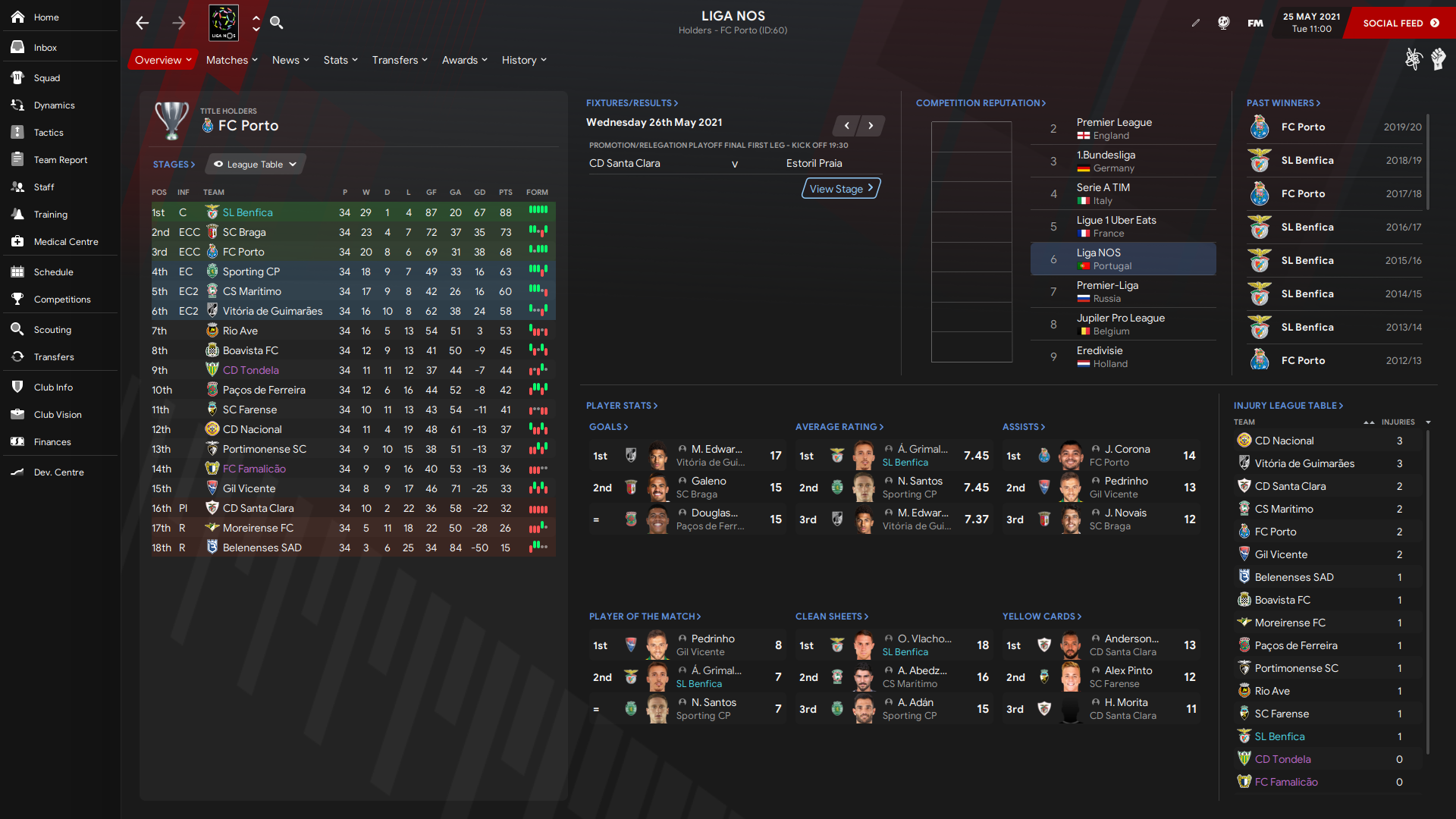 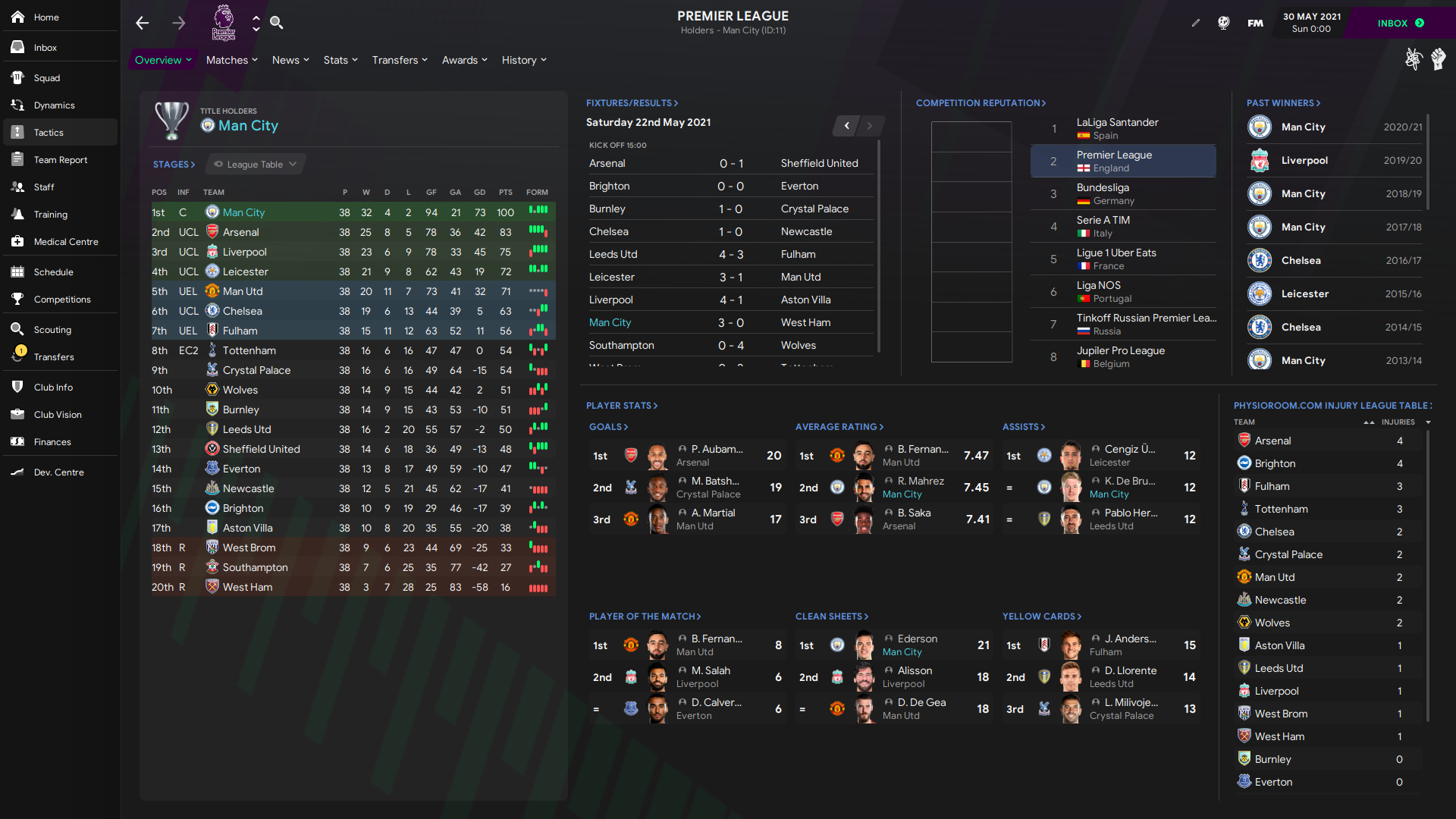 Threedom by Egraam
Posted Mar 28, 2021
I've been trying to make 3 defenders at the back work, and this tactic has managed to get some decent results for me. Team instructions and set pieces are from ZaZ Blue (offensive throw ins from Pheonix), but the tactic has no fullbacks or wingbacks, defenders with stopper and cover duties, no offside trap, double playmakers and 3 AMCs so it should provide a bit different playstyle than the current meta tactics. I need to work on the defense because the tactic is a bit leaky but offensively it's pretty good. 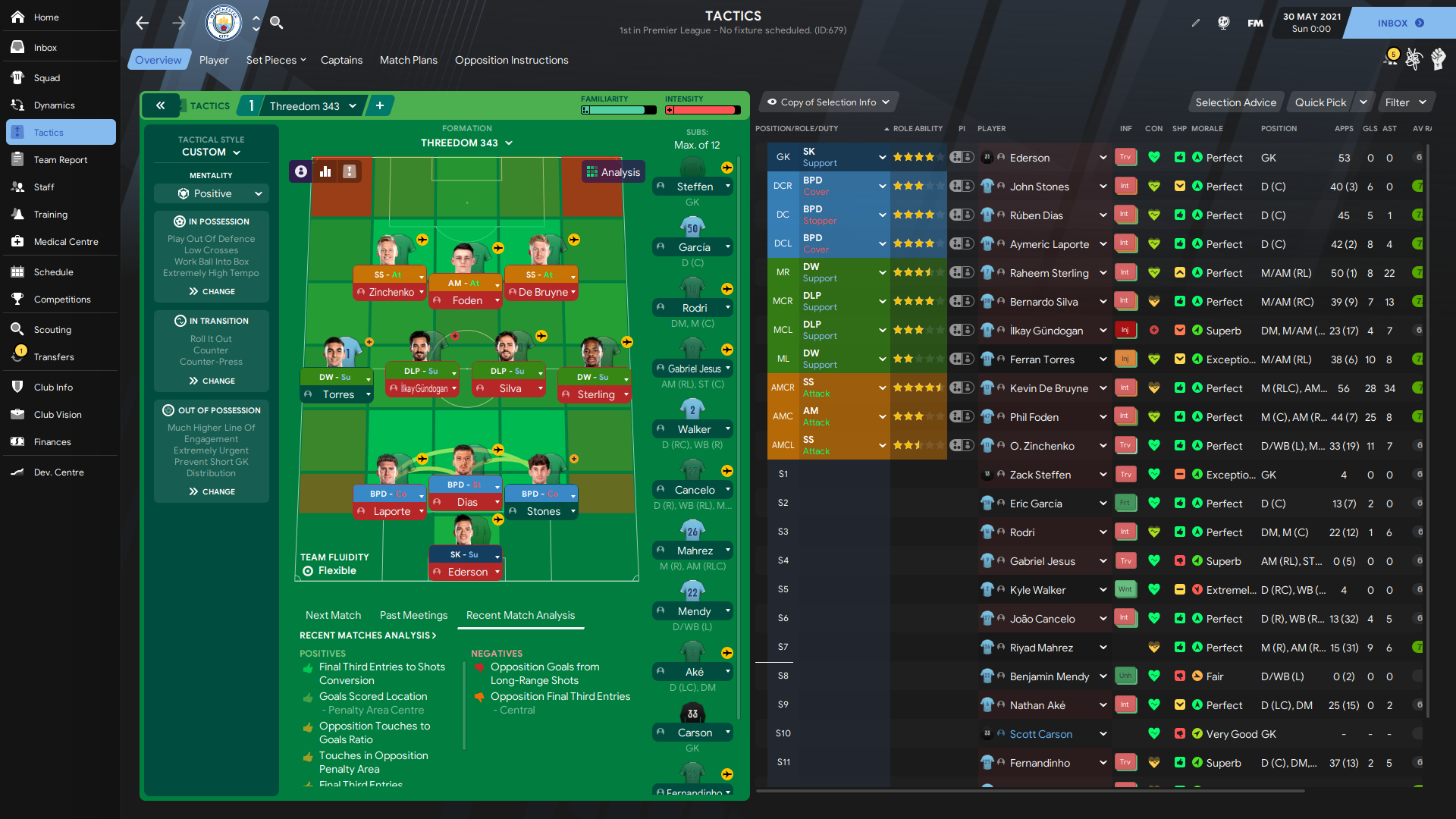 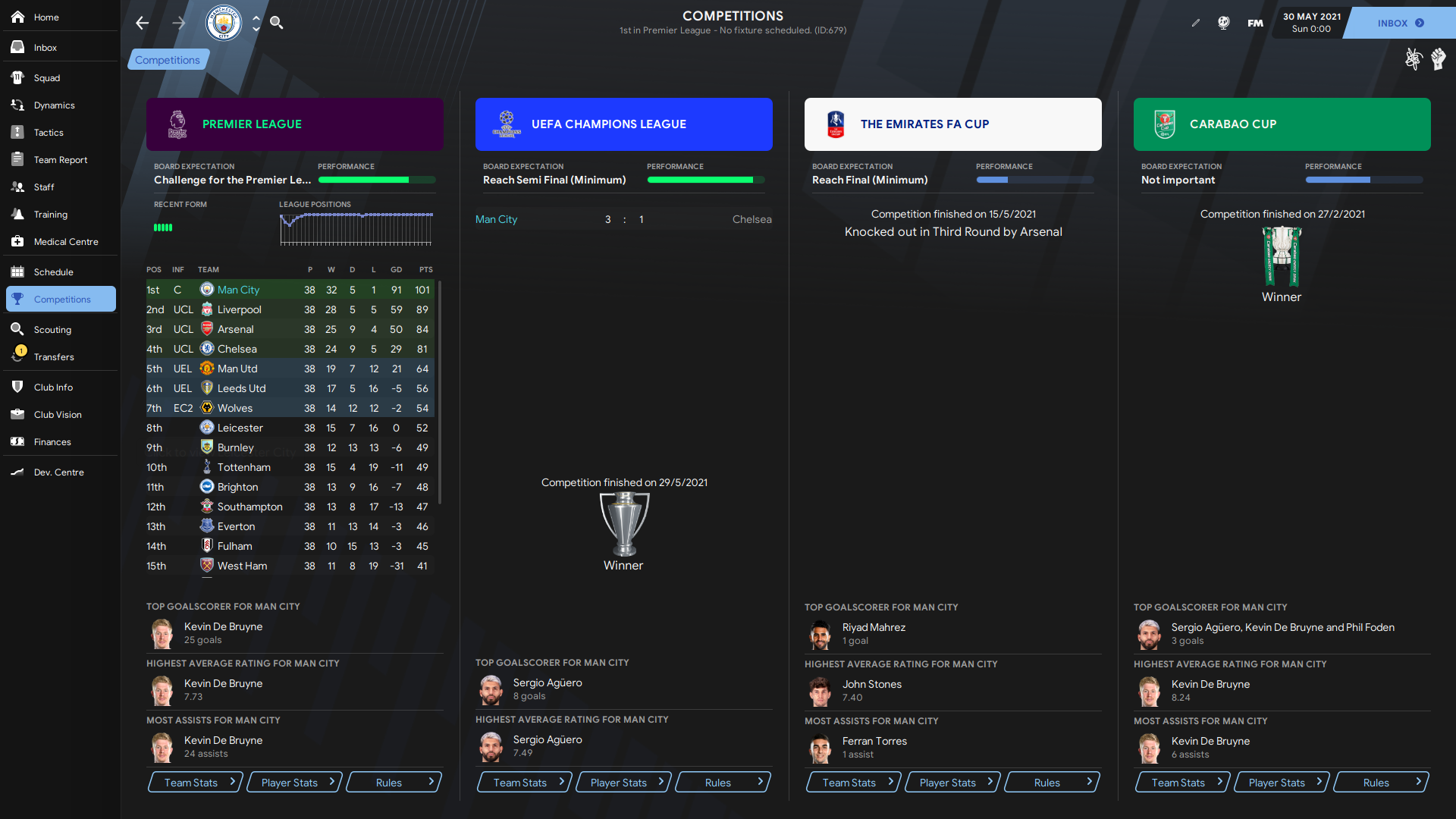 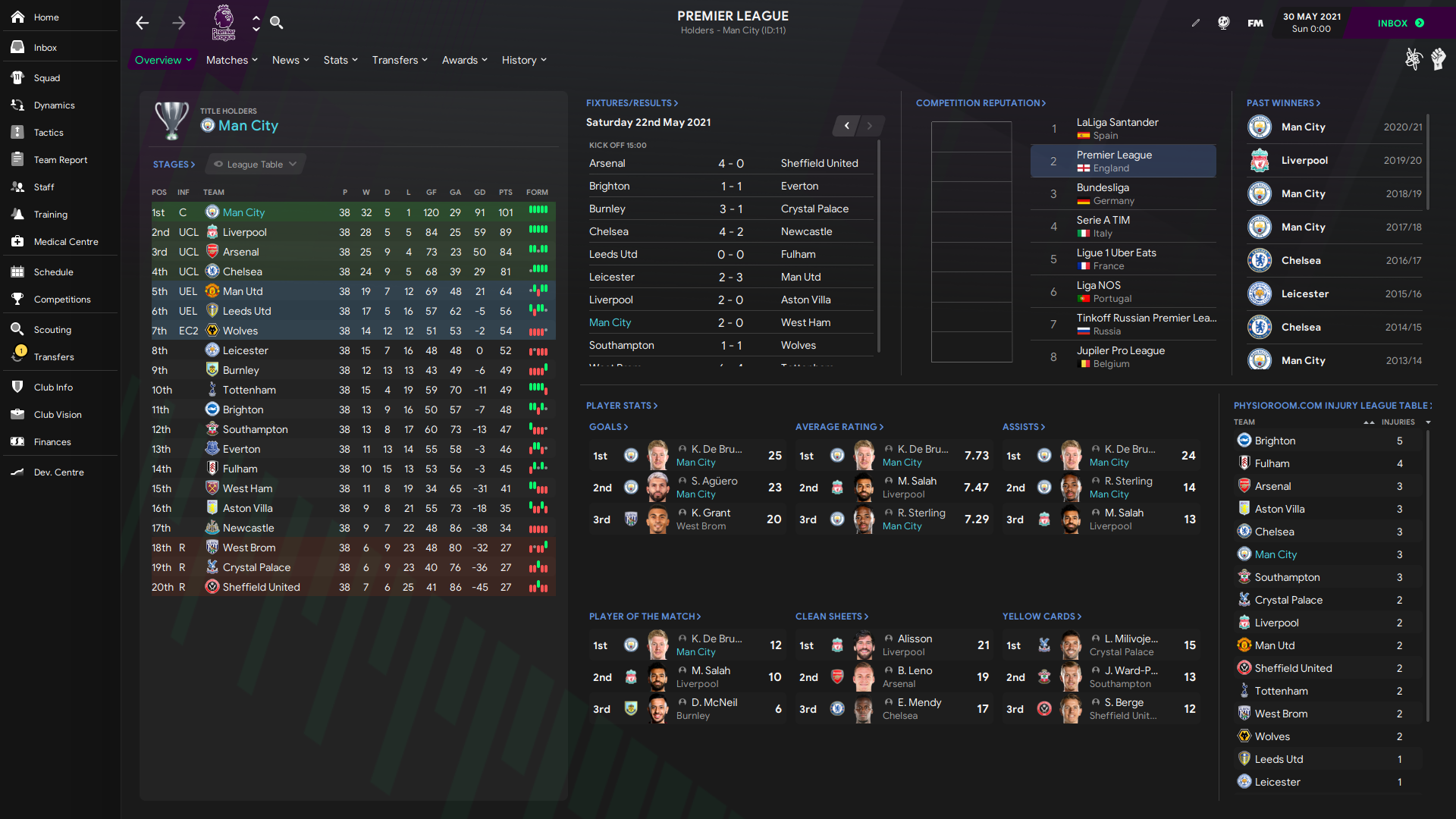 - Updated set pieces (the previous ones were a bit outdated because I've kind of forgot about this tactic for a while)
- Removed Pass it shorter from wingers
- Removed Slowed pace down, throw it long and distribute to full-backs from distribution
- Added Roll it Out to distribution

As you can see it's quite consistent, only 1 point differnce between two runs, and both won FA and Carabao cups. 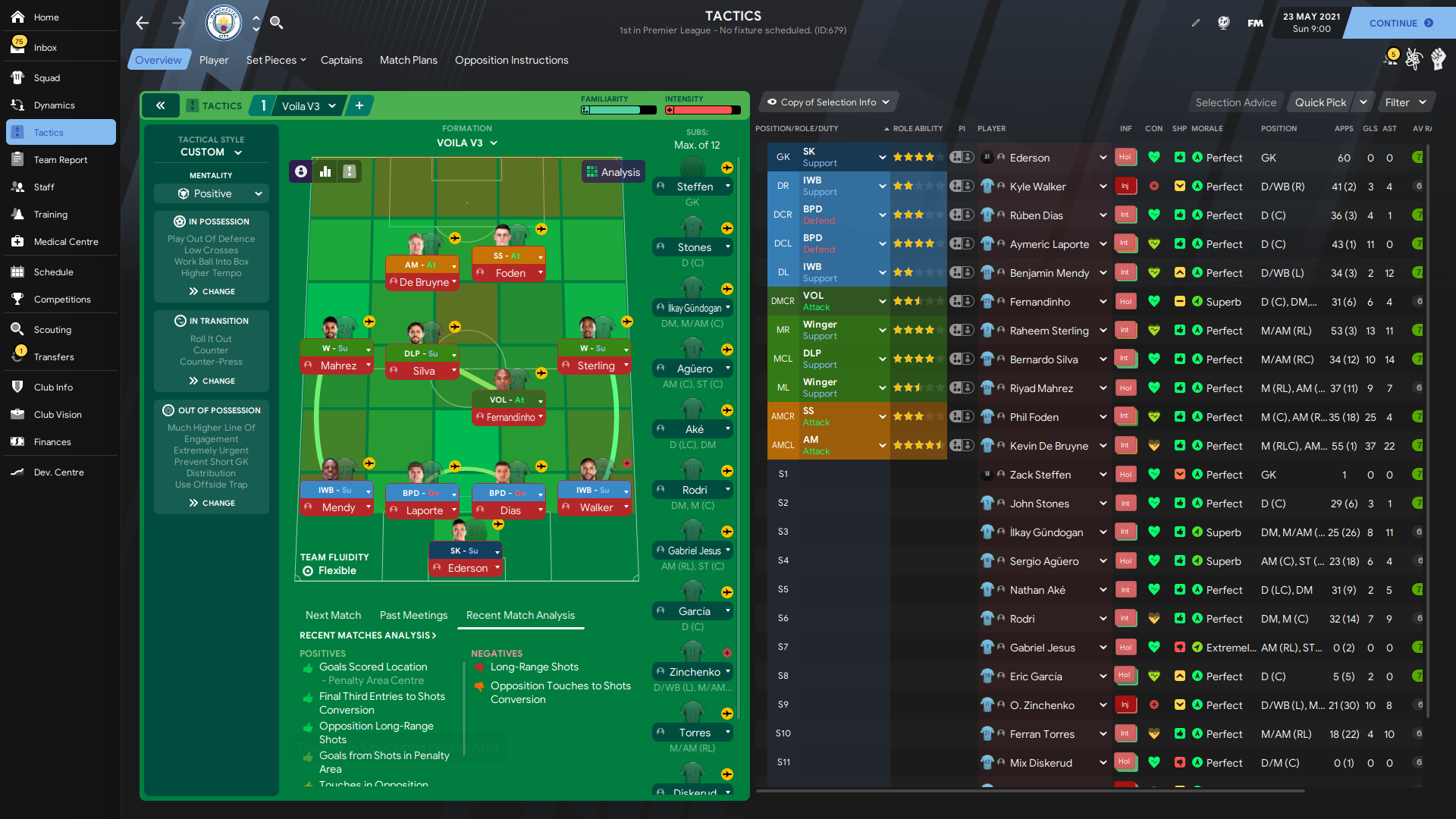 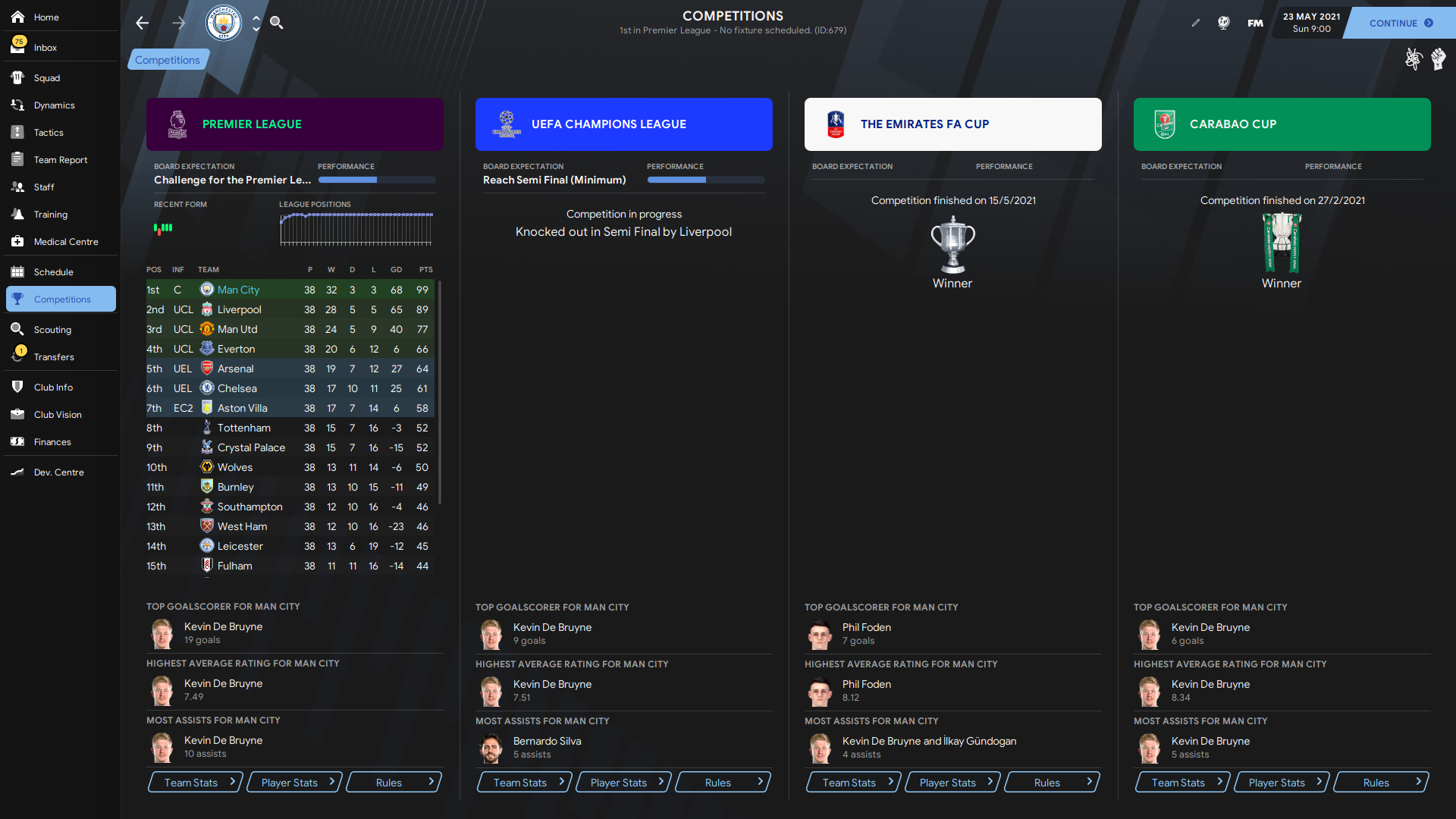 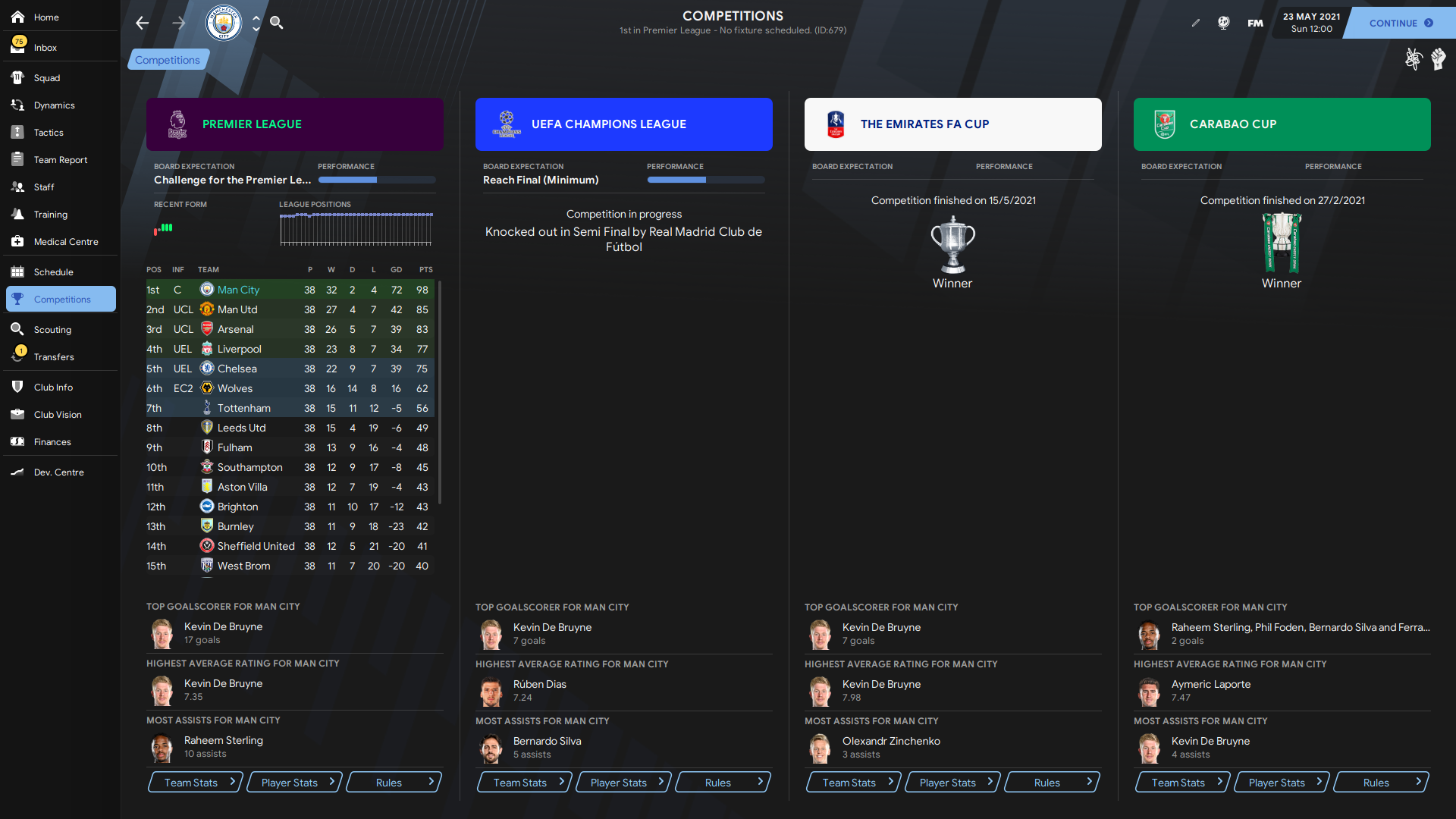 ZaZ - Blue 3.0
Posted Mar 21, 2021
Prutton said: Finished testing here, but it didn't work for me. It doesn't mean it's not better, just that for my method of testing, it didn't improve. Different methodologies give different outcomes, with the difference from fm-arena and fm-base being a big example of that.

I tested the suggestions individually, as well as all together (the version you posted). Expand

Should have probably expected that, because the only thing that changed between those two tactics from 21.3 testing table and the current one are throw-ins, and Pheonix then was #1 and ZaZ - Blue was #2 while right now is the other way around. Could be because of the number of tests run and ZaZ - Blue was better all way long, but it's probably a proof that the Pheonix throw-ins aren't that much better.

I'll still be experimenting with throw-ins because it's probably one of the only parts of the tactic that can be improved, everything else is most likely as optimised as it could get. Congrats on an amazing tactic