Corsair IF
Posted 6 days, 13 hours ago
People, could we please keep this place free from a drama. We've got a special section for it so please.
ZaZ FC
Posted 14 days, 3 hours ago
Kaczy said: And 1.0 version is different then 0.3 ? Expand

I don't think there's any difference between them
ZaZ FC
Posted 14 days, 3 hours ago
Kaczy said: why in tests there is 0.1 version not 0.3? Expand

it's 1.0, which was tested, and not 0.1
Plagiarism
Posted 14 days, 21 hours ago
Jeffdekker said: Aren't the same?
Formation is the same Expand

The formation isn't the same, there's CM position instead of DM position.

Jeffdekker said: So basically you're justifying people can copy other people their work and claim to be their own?

I'm just saying that at this point you just can't post anything and not being in plagiarism
Plagiarism
Posted 14 days, 21 hours ago
Jeffdekker said: Funny you say this, we addressed this to Knap.
And hey look:

So basically we can say, doesn't mean we will, Zaz took this inspiration from Knap.

Got anything to say for that? Expand

The tactics aren't the same.

If you want I can't find you like a hundred similar looking tactic from FM21 and FM20.

The thing is, the game hasn't changed for many years and if you take any FM23 tactic then you can find a very similar tactic from FM19 or FM20 or FM21 or FM22.

At this point we really already seen everything when it comes to the tactics in FM and there just can't be anything new.
Positive Tiki Taka - CMs ( Attack )
Posted 14 days, 22 hours ago
kjordafen said: My favorite tactic from fm22, would be interesting to get this tested on fm23. Anyone had great success with it on fm23? Expand

I've tried it and found it turned to be much weaker than it was back in FM22
Plagiarism
Posted 14 days, 22 hours ago
Metal said: Well there is no real debate to be had. Knap released a tactic on 23rd of October and 4 days later MakeSure manages to produce the exact same replica of player and team instructions. Expand

Ok, if we want to refrain from double standards in our approach then you have to explain me this 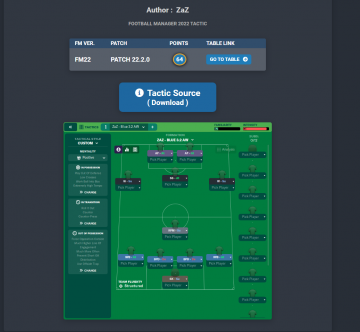 and on 9th May, Knap released another tactic that looked almost exactly like ZaZ's Blue tactic

I really don't see that Knap giving ZaZ any credit.

What do you think about it?

P.S. also, look at this FM22 tactic by Johnsariman... don't you find any similarities?

He got only 71 pts with Tottenham... it doesn't look promising if you ask me but let's see other people results.
Positive Tiki Taka - Complete Wing-Backs | FM23 Beta Result
Posted Oct 22, 2022
It looks like in the fm23 beta this tactic delivers a weaker result than in fm22... sad.
FM23 BETA DAY
Posted Oct 20, 2022
morgh1sto said: Are we sure it will come out today? Expand

It isn't set in stone but highly likely

Especially, after a FM23 Beta teaser appeared few hours ago on the official SI tweeter 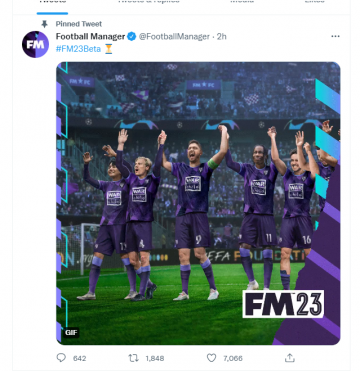 https://twitter.com/FootballManager
Player Development and Training
Posted Oct 19, 2022
Zippo said: - If you look at the tests then you'll notice that a very strong development happens when a player has at least a 20 points difference between PA and CA, his Professionalism & Ambition attributes are higher than "10", he is younger than 28 years old and he plays at regular basis at least 1 match per week. Expand

I guess this is the necessary rule for having a rapid attributes grow.
Football Manager 2023 - Release date - 8th November
Posted Oct 10, 2022
I really hope there'll be some significant changes in the M.E. because the M.E. haven't seen any significant changes for many years already.
VOID ~ ver. 2.0 ~
Posted Aug 19, 2022
faisal said: WIll there be injuries Expand

with this tactic for me injuries happens not much often than with any other high intensity tactic
Top 10 to do list when starting a new save
Posted Aug 8, 2022
As always a very good work here.

I want to ASK, If you can Share your Test League.

I iwant to Test my own tactics.

After you have stopped Testing FM21 tactics, maybe you can Share a Savegame which Starts at the beginning of the League to bei able Test by my own.

As far as I know fm-arena doesn't share any of its testing leagues even from the previous FM versions.
1 2 3 4 5 NEXT 7