Prutton
Profile
Find Threads
Find Posts
1 2 3 4 5 NEXT 34
ZaZ - Blue 3.0
Posted 14 hours ago
drhay53 said: Again it's a lot of effort to manage your rotation and you'll need a deep, gelled squad to keep your results up. I don't particularly think it's realistic to have to rotate quite this much, but it has a huge impact on injuries so I can't pull myself away from it. Expand

I checked here if any team managed to win a big league while rotating the entire team, and found out it happened in Brazil in 2018, with Palmeiras.
Who says strikers don't work? 😉
Posted 23 hours ago
Jammy1982 said: Dane Scarlett, BEAST! Expand

Let him play as shadow striker and see the real beast.
ZaZ - Blue 3.0
Posted 1 day ago
Gpassosbh said: Hello @Prutton , I'll use ZaZ Blue 3.0 as my primary tactic. Which other 2 tactic you recomend to fill all the 3 tactic space? Maybe one more defensive, and another more attacking. Can you tell me? Expand

For those three, you just need to train Blue 3.0, any tactic with cautious mentality and any tactic with very attacking mentality. I'd recommend Light Blue 3.0, which can also be used when you have a good lead and want to rest a bit and get less yellow cards, and Dark Blue 3.0.

If you want different tactics, then I would recommend Copper and Void, but I believe cautious Blue is as good as Copper in defense and very attacking Blue is as good in offense as Void. However, this was not tested here yet, it's just my feeling based on personal tests.

I've had great success playing this tactic (ZaZ - Blue 3.0), but with one striker. It might not be as effective as the original, but it will definitely still overachieve. Sometimes it's annoying having a top striker in your team, but he can't play the AMC position, or will take a long time to train it.

I use wingers on support, but with press more in the individual instructions. I've done it on all positions. Also you should slightly change the set-pieces to fit the new formation. 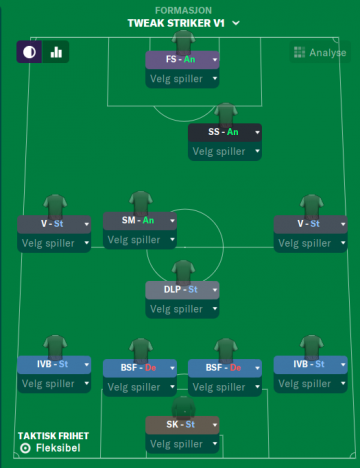 I believe there is a similar tactic called Comet, but you can always post that tweak to get it tested and see how it performs. I've been testing some things lately but didn't have much success in finding any improvement.
ZaZ - Blue 3.0
Posted 1 day ago
Elpitcho said: Hi guys ! I am playing with Leeds, finished 3rd first season and about to finish 2nd this time. I know these are good results but I was wondering why my players are always struggling at the end of the season... I was 1st the from GW5 to 30 and now I am struggling a lot even against weak teams.

I pay a lot of attention to their fatigue, injuries. The atmosphere is good, the team spirit as well... I mean everything looks fine but don't know why I am struggling... Expand

By the end of a season, the two main factors for a team to perform badly are fatigue (which is different from condition, you can see it at medical centre) and psychology. Players from small teams usually get nervous when they are overachieving, so you need to relieve their pressure before the matches. On the other hand, teams usually get complacent against weaker opponents, so you need to challenge them when they get complacent. In other words, you need to check the players body language and understand if they are cracking under pressure or getting complacent, then give the right pep talk to get them back in shape.
ZaZ - Blue 3.0
Posted 2 days ago
Canari Tahiti said: Hi, everybody and here is my first message in this forum.

first your tactic is unbelievabel and i have wonderful results. Just a question i am the new manager of Lyon and i have the opportunity to bring back Benzema to the club but he wants to play as a deep lying striker.

Do you think it will be a big chance to use him as his best role ?

Thanks in advance for your answer Expand

If you want to use real strikers, there is a tactic called Fanatic, from @Maverick, which has the best results. However, there is no top tactic using the role deep lying foward.

If I were in your place and a player only wanted to sign if I promise to play him in his best role, I would just lie and play him in another position. Maybe he would be angry in the first few months, but after a while he drops his concern, specially if he is happy with other things like victories, playing time or club atmosphere.
ZaZ - Blue 3.0
Posted 2 days ago
Mishkat said: Hi just wanted to know who should take corners? If its mentioned above then extremely sorry about that. Expand

Just leave it empty so it goes to best taker.


Maxeneize said: After several season I arrived to Aalborg. They did not have quality strikers so I decided to go back to using zaz. Their media prediction was 4th and we dominated the league. We also had a good run in the EL, where we were unlucky against OM, as in both games we had a player sent off very early. My best player has a ca of 140, but most of them are around 120, so we did cause some mayor upsets with this tactic Expand

Nice job! Remember to evaluate your squad by the end of each season and keep an eye on those players that get sent off too often. That might mean they have high Dirtness hidden attribute, which could make them unreliable.
ZaZ - Blue 3.0
Posted 2 days ago
just me said: does the foot of the DC are important? i am playing DCL left foot and DCR right foot. Expand

Not much, but they tested here before and got the result that same foot as side is better than inverted foot, for both defenders and strikers.
ZaZ - Blue 3.0
Posted 2 days ago
just me said: thanks mate. i am also doing rotation, so i have 2 best 11. btw would it be fair to say that the DR and DL are important players for this tactic? last year my DR made 17 assists in the league. Expand

Not only important in attack, but they are also the last line of defense in attacking set pieces, so having fast wingbacks is really important to prevent counter-attacks.
ZaZ - Blue 3.0
Posted 2 days ago
just me said: Thanks for the tactic Expand

That's some good management there to not let players go complacent or anxious. Good job!
ZaZ - Blue 3.0
Posted 2 days ago
bula1899 said: Im not sure that zaz blue is the best tactic in FM21, but im sure that in my journey with FM 21 im going to always use this tactic, what a results!
in my career i trained Bursaspor, in the mid 3th season(2th team in Turkey in this moment) i stopped use tactic from Knap and change tactic to zaz blue.
4th season i won  CL

(problem was  that my  2th teams has a lot of injuriersand lost 2 goals in final, but not was a huge problem. better example was semifinal with Real, 4:0 and 3:0 for me)


but the best example are my results with OM, always win, without concede goals, easy 4:0 with PSG(22-2-1 After loss with me).


Thanks, really recommended read this comments in this thread like the most important attributes, strategy for change mentality etc. Expand

Those are some nice results, good job there!
REAPER
Posted 4 days ago
Misterick said: Hi. Could Fm Arena test Reaper v4 from same author? I'm having amazing results with it. Thanks for all the work. Expand

You need to create a topic for that in the forum, in the tactics sharing section.
ZaZ - Blue 3.0
Posted 4 days ago
Cazador said: @Prutton : Do IWBs need to have different side strong foot than the side they are playing on? Eg: Right IWB needs to be stronger on the Left foot? Expand

It's not important. Your assistant manager will give them less stars if they have same foot as side, but his opinion doesn't have any effect and you can safely ignore it.

Strong foot is needed to either cross (same side) or shoot (inverted), but IWB doesn't do any of those. In the end, it just makes it easier to pass the ball to flanks or center, but since the tactic is balanced to either direction, it doesn't make much difference at all.
Sorting scouting
Posted 5 days ago
Don't trust in your scouts for potential. As a basic rule, good players at young age usually have more potential than bad players at young age. If you find a kid with 15-16 years old and 13+ pace and agility, sign him.
ZaZ - Blue 3.0
Posted 5 days ago
Keshk said: I just need to know what is the Most important attributes for deep lying playmaker .. they always being in a bad form .. not that affect like others. Thanks in advance Expand

They usually perform badly in any tactic using this formation. For attributes, I usually look for PAce, Acceleration, Agility and Jumping Reach.
ZaZ - Blue 3.0
Posted 8 days ago
Egraam said: You can also arrange friendlies against very weak teams and play them in those in the desired position. This is probably the best method if you want to do it as fast as possible and can't really afford to play them in league matches when they are unfamiliar with the position. Expand

You can also arrange friendlies with the reserve team and make them available, or even take command to make sure they are played in the right position. I usually do that when my second team players need match fitness.
ZaZ - Blue 3.0
Posted 8 days ago
ta2199 said: @Prutton Whats your method to retrain players to new position ? I usually let player has individual training + Double Training Intensity + Add them to mentoring group.
Is this the fastest way ? Expand

Just like @Rince said, training focus and playing time in the position. I usually bring them as subs when the match is already won, at least until they become accomplished. There isn't much difference between accomplished and natural players, so after that point you can just use the best player.
Which tactic should i use ?
Posted 9 days ago
https://fm-arena.com/table/11-patch-21-4-0/
ZaZ - Blue 3.0
Posted 13 days ago
pixar said: Really great tactic. I'm playing with a 90 percent win rate. The producer has thought of everything. congratulations.
I read all the posts in this post, and I check it every few days. I formed an emotional bond with the tactic.

I have only one wish from the producer. publish player traits recommendations for all positions.
thanks for your efforts. Expand

Thank you so much! Unfortunatelly, there isn't much to say about player traits. Just add traits that reinforce the roles (based on player instructions). For example, Move Into Channels to Shadow Strikers.
AFTERLIFE
Posted 14 days ago
Zealot said: what do you mean? Expand

I suppose he means what kind of player for these positions.
ZaZ - Blue 3.0
Posted 14 days ago
dingus said: what makes all these 0 striker formations so good this patch? i feel like they won't be so good for long Expand